Rabat - A policewoman in Khenifra was verbally abused and beaten unconscious by a male passenger on Thursday after she fined the driver of the car transporting him for a traffic violation, according to a report by Alyoum24. 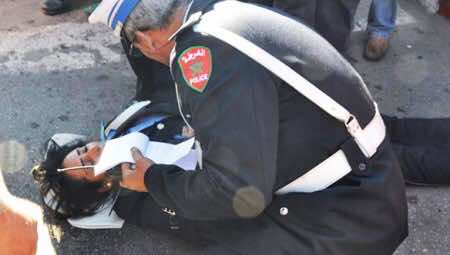 Rabat – A policewoman in Khenifra was verbally abused and beaten unconscious by a male passenger on Thursday after she fined the driver of the car transporting him for a traffic violation, according to a report by Alyoum24.

After the incident, ambulances rushed her to a nearby hospital where doctors completed emergency surgeries to save her life. Her mental and physical health is still unstable, according to her caretakers at the medical facility.

A security official called the incident “violent” and eyewitnesses said the man, who was seated next to the driver in a Saturn 15, continued beating her without regards to her deteriorating state until locals stepped in to protect her and hit him in return.

Other witnesses said she had been verbal threatening the passenger and the driver before the situation turned sour.

Sources in Khenifra said that a similar incident of violence against a policewoman had occurred in the area before, when the officer responded to a call by an employee who was being insulted by a local. When she approached the car seating the offender, he slapped her in front of witnesses.