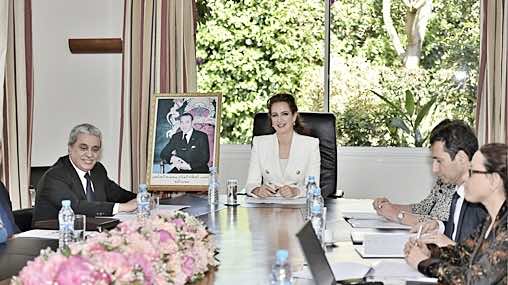 On this occasion, the Council examined the 2015 financial statements and the management reports to be submitted to the Annual General Assembly of the Foundation.

The year 2015 was marked by the celebration of the 10th anniversary of the Foundation, which was an opportunity to take stock of ten years of struggle against cancer.

The results of a mid-term evaluation of the 2010-2019 National Cancer Prevention and Control Plan were presented by the experts of the High Council of Public Health and the Institute of Public Health of Epidemiology and Development within the University of Bordeaux II, who conducted this evaluation.

The year 2015 was also marked by the opening of the Institute of Cancer Research in Fez, as well as Morocco’s accession to the International Agency for Research on Cancer of the World Health Organization. Several research projects have been identified between the two Institutes, which will begin in 2016. A computerized platform was also developed to process calls for projects with a powerful management support and facilitate assessments by international experts.

This momentum was possible thanks to the confidence and the support of partners and donors of the Lalla Salma Foundation, to whom the Council expressed their thanks and recognition. The Council also welcomed the personal commitment of HRH Princess Lalla Salma and the excellent management of the Foundation.

In a statement to the press on the sidelines of the meeting, Latifa El Abida, Secretary General of the Lalla Salma Foundation for Cancer Prevention and Treatment, said that 2015 saw a significant increase in the pace of project achievements in all its areas of the intervention of the Foundation.

For Moulay Tahar Alaoui, President of the scientific council of the Foundation, 2015 was “a year of extremely important achievements, since we extended services to almost all regions of Morocco with the means available to doctors for treatment, diagnosis and monitoring”.