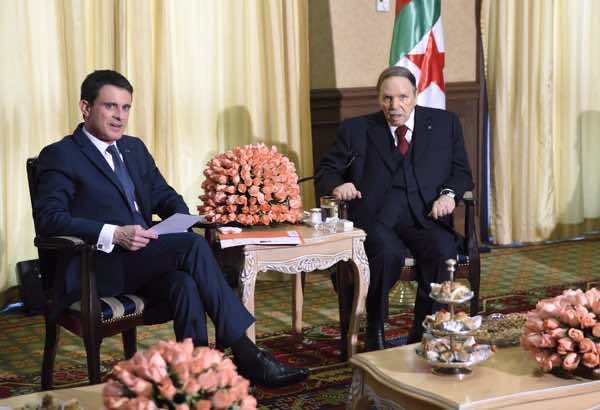 On his official account, Manuel Valls tweeted a photo of himself with the Algerian president, along with a brief statement that read, “economic, human and security exchanges: the Franco-Algerian relationship is strong, historic and strategic.”

The statement by the French Prime Minister praised “historic” French-Algerian  relationships, but the photo featured an appearantly exhausted  Boutflika, and has angered Algerians.

In the photo, the Prime Minister looks smart with a smile on his face, the Algerian President appears sad, looking lost with his mouth uncontrollably open.

According to Russian state television, Russia Today, Manuel Valls’ tweet caused an uproar on the internet, where “many Algerian internet users expressed their anger.”

“Yet another attack on the image of the president,” read one  comment, and

“This publication, a desire to harm the image of Algeria,” read another.

Algerians accused the French press of mocking the head of the Algerian state, claiming they took pleasure in the photo’s wide usage across French media.

Social media users are expecting that the visit of the French Prime Minister to Algeria will mark a turning point in Algerian-French relations, which has historically been a tumultuous one.

Manuel Valls reportedly visited Algeria in attempt to resolve the dispute trigged by Le Monde’s publishing of the Algerian President’s photo in its coverage of the leaked Panama Papers.

On Tuesday of last week, Le Monde published a front-page image of Bouteflika before clarifying that the Algerian President’s name did not appear in the leak of millions of financial records from a Panamanian financial firm.