Rabat - A cooperation and partnership agreement was signed on Monday in Rabat between the Academy of the Kingdom of Morocco and Mandela Institute for Development Studies (MINDS) with the aim of promoting and supporting the exchange of African elites in the continent. 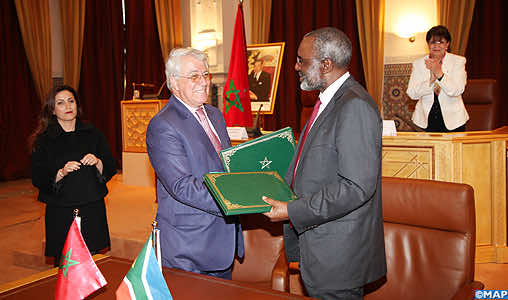 Rabat – A cooperation and partnership agreement was signed on Monday in Rabat between the Academy of the Kingdom of Morocco and Mandela Institute for Development Studies (MINDS) with the aim of promoting and supporting the exchange of African elites in the continent.

The agreement, signed by the Permanent Secretary of the Kingdom of Morocco’s Academy, Abdeljalil Lahjomri, and MINDS Executive Chairman Nkosana Moyo Donald, seeks to support students and researchers exchanges in the African continent.

The agreement will help young Africans establish networks across the continent and benefit from scholarships to continue their studies in African countries, Former South African First Lady and MINDS chairwoman Graca Machel told the press following the signing ceremony.

Speaking at the signing ceremony, Lahjomri said that the Kingdom of Morocco’s Academy seeks to be a bridge between MINDS, Africa and Moroccan and African universities.

The Mandela Institute for Development Studies (MINDS) is a continental institute that seeks to address the short, medium, and long-term development challenges in Africa.