Taroudante - The Boston Globe published a parody front page on Sunday that imagines what the newspapers headlines could look like if Trump were to make it to the White House. 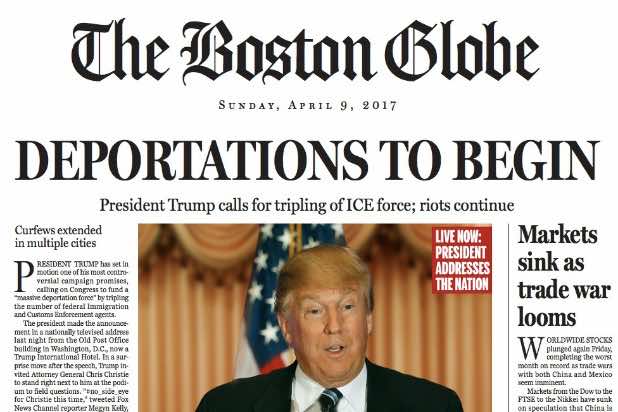 Taroudante – The Boston Globe published a parody front page on Sunday that imagines what the newspapers headlines could look like if Trump were to make it to the White House.

The fake page, with headlines like “Deportations to Begin” and “Markets Sink as Trade War Looms,” ran as the front page of the newspaper’s “Ideas” section, with an editorial denouncing Trump’s candidacy on the next page.

The Boston Globe editor’s note said that “What you read on this page is what might happen if the GOP front­run­ner can put his ideas into practice, his words into action.”

“Many Ameri­cans might find this vision appeal­ing, but the Globe’s editorial board finds it deeply troubling,” the note reads.

The fake front page, which is dated April 9, 2017, is trying to show the possible consequences of an America under Trump’s presidency and take his rhetoric and his policy positions to their “logical conclusion.”

“It is an exercise in taking a man at his word,” the editorial says.

The newspaper envisaged a scenario where the USA would be in a crisis with China after Trump allegedly insulted the country’s first lady Peng Liyuan by tweeting a photo of his new pet shar-pei, “a wrinkly pup named Madame Peng.”

Donald Trump slammed the paper calling it “worthless” and “stupid” during a rally on Sundayin Rochester, N.Y.

“How about that stupid Boston Globe, it’s worthless, sold for a dollar,” he said.