Rabat - Regions below the Atlas Mountains in Morocco could be at risk for new desert locust infestations from the “hundreds of small hopper bands” that have formed in the Western Sahara, in southern Morocco, according to a statement by the Food and Agriculture Organization (FAO) of the United Nations released on Tuesday. 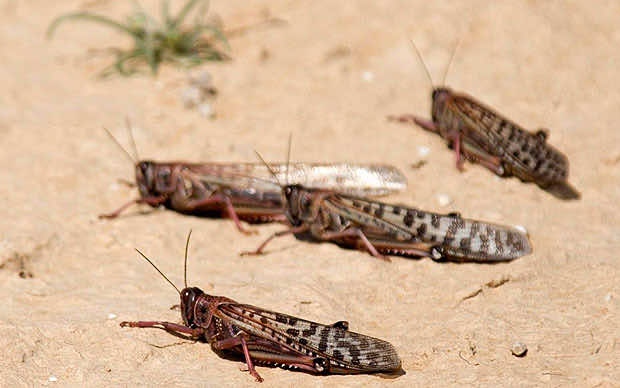 Rabat – Regions below the Atlas Mountains in Morocco could be at risk for new desert locust infestations from the “hundreds of small hopper bands” that have formed in the Western Sahara, in southern Morocco, according to a statement by the Food and Agriculture Organization (FAO) of the United Nations released on Tuesday.

The statement said groups of adult desert locust groups and a “few” small swarms could form and move to breeding areas south of the Atlas Mountains in Morocco and Algeria in April for the springtime. Two aircraft are currently on standby in the Western Sahara in case of further outbreaks.

“Strict vigilance is required in all areas,” the statement read, specifically urging authorities to closely monitor developments in the Draa Valley, formed by a river that flows into Algeria.

Earlier this year, “hopper groups” formed in the northern areas of Mauritania that border Morocco, an FAO statement said last week, adding that ground control operations are active in the two neighboring countries and 5,000 hectares of Moroccan land received corrective and preventative treatment in March.

The FAO said “[small] hopper bands” and “swarms” of desert locusts recently formed in southern Yemen after the area received heavy rains last November from two back-to-back cyclones from the Arabian Sea. The U.N. Agency also said the civil unrest in the country is limiting the scope and effectiveness of the protocols in place to prevent and fight against locusts.

The most detrimental effect of locusts on human society remains their ability to devour entire fields of crops within days, the organization said.

“A very small swarm eats the same amount of food in one day as about 35,000 people and the devastating impact locusts can have on crops poses a major threat to food security, especially in already vulnerable areas,” the FAO said.

The last major locust infestation in Morocco occurred in 2004 – a year during which the Western Sahara received 100 millimeters of rain when the region usually receives less than 1 mm. One swarm in between Tarfaya and Tan-Tan in Morocco held a total of 69 billion locusts and was 250 kilometers long. The FAO estimated that locusts ate approximately USD 2.5 billion worth of crops in Africa that year.