Rabat - A newly updated map measuring political risk around the world ranked Morocco as a “medium risk” country, ahead of  every other country in North Africa in terms of safety and stability. 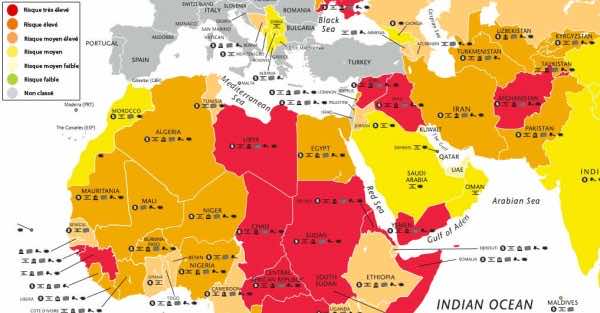 Rabat – A newly updated map measuring political risk around the world ranked Morocco as a “medium risk” country, ahead of  every other country in North Africa in terms of safety and stability.

Three of Morocco’s neighbors on the Mediterranean Sea – namely, Algeria, Libya, and Egypt – were classified as “high risk countries,” and Mauritania, which neighbors the kingdom from the south, fell in the same category.  Tunisia fared better, as it was listed in medium-high risk category.

The map, which has been published annually for 19 years by the consulting company AON, measures the level of political risk in several emerging countries in the world as an informational tool for companies looking to invest abroad.

Other members of Morocco’s  “medium risk”  category include Brazil, India, South Africa, Oman and Saudi Arabia; the last pair were the two Arab League countries other than Morocco in the same category. The analysts ranked three Gulf Cooperation countries – Qatar, the United Arab Emirates and Kuwait – in medium-low risk category.

The map marked Syria, Yemen, Iraq and Somalia in red, signaling the “very risky” nature of operating a business in the states due to their weak governments, ongoing civil wars and terrorist activities.

“Morocco is a monarchy of North Africa, relatively stable, with a business environment relatively strong compared to other countries in the region, and a moderate level of political risk,” the analysis accompanying the map said. “The difficult transitions that took place in Tunisia, Egypt, Syria and Libya were a lesson for the Moroccan population, which reduces the pressure on King Mohammed VI, who has strengthened the role [of the government and parliament] while retaining the ultimate power.”

The report says it expects Morocco to grow in the long-term as it has managed to attract many European companies to conduct their Africa operations from Casablanca, but the authors added that the neighboring continent’s economic vulnerabilities and the kingdom’s unpredictably hostile weather conditions could hurt future economic growth – as it has this year.

The 2015 report also identified some key indicators for foreign investors considering opportunities in Morocco, including the default risk probability – reflecting the chances a government does not repay its debts – which amounts to 0.96 percent and the likelihood of confiscation – measuring the probability that a business is confiscated or appropriated by the local government – which stands at a mere 0.54 percent.