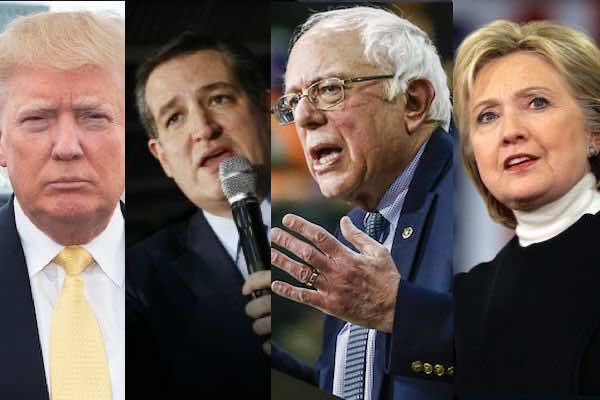 Rabat – While the rhetoric of the American 2016 presidential campaign has caught the attention of readers both at home and abroad, debates over women’s rights on the Republican side and concerns about climate change and fracking among Democratic candidates have largely resonated within U.S. borders. However, given the role of the U.S. as a key player in shaping events worldwide, watchful eyes abroad are looking to how the candidates for the U.S. presidency might affect that nation’s foreign policy and immigration to the United States at the start of next year.

The Council on Foreign Relations (CFR), Ballotpedia, and On The Issues are all independent, non-partisan organizations that have compiled interactive lists of issues related to foreign policy and the stances of all candidates on each issue. Given the prevalence of international concern relating to Daesh, as well as Iran’s nuclear program, both on the campaign trail and in the international media, this is my take on the leading candidates’ positions on these two issues, but more comprehensive lists can be found on these organizations’ websites.

On the issue of combatting Daesh — also known as the self-proclaimed Islamic State, ISIL or ISIS — both Democratic nominees would seek to utilize a coalition of Western and Arab states to counter the terrorist organization. They both state a strong interest in avoiding a large deployment of U.S. ground forces to countries such as Iraq and Syria, but Secretary Clinton has advocated the use of American Special Forces to aid foreign allies through both military training and accompanying regional forces on combat missions. In contrast, at a Democratic forum in South Carolina last November, Sen. Sanders stated his opposition to using American Special Forces in Syria, highlighting his reluctance to be drawn into another large scale conflict in the Middle East. He added that he was opposed to the Iraq war from the beginning, unlike Clinton, emphasizing that the former Secretary is overeager to use military action in the region.

Both candidates support utilizing airstrikes in the conflict; but while Bernie Sanders has stopped short of calling for a no-fly zone over parts of Syria – claiming that it risks pulling the U.S. into another quagmire like the war in Iraq – Hillary Clinton has pressed for the imposition of a no-fly zone, deeming it necessary for the protection of refugees in the area.

Similar to their colleagues in the democratic camp, both Republican hopefuls support a coalition of Western and Arab states to counter Daesh. However, while both candidates currently agree that an increase in airstrikes in the region would be beneficial, this position contrasts Ted Cruz’s previous position. In statements from October 2013, Cruz declared that the actions of President Bashar al-Assad did not warrant retaliatory air strikes since his actions did not threaten U.S. national security.

Where the two Republicans vary drastically is on their stances on the use of ground forces in Iraq and Syria. Cruz has argued against the deployment of a large U.S. ground force, while Trump has recently stated that he would be willing to authorize tens of thousands of American ground troops to combat Daesh, saying “we really have no choice, we have to knock out ISIS.” He continued, “I would listen to the generals, but I’m hearing numbers of 20,000 to 30,000.”

While Trump has since reversed his position on the issue of torture, he has previously stated that he would use his Presidency to authorize the torture of terrorism suspects and the execution of their families. He later qualified his comments, saying, “I will not order a military officer to disobey the law. It is clear that as President I will be bound by laws just like all Americans, and I will meet those responsibilities.” While his later comments may be a more realistic stance for the Republican candidate, it is his initially incendiary rhetoric that has caused many, especially abroad, to question his true position on issues of foreign policy.

Anyone who followed the development of the multinational deal to limit Iran’s nuclear program knows that it is a heavily partisan issue in the U.S., with Democrats praising the landmark agreement orchestrated by Secretary of State John Kerry, and Republicans denouncing it as a policy that will only embolden Iran’s ability to produce a nuclear weapon.

Both Clinton and Sanders have stated that they would abide by the deal if elected President, and that any attempt to break from the agreement by the Iranian government would result in an immediate reimplementation of sanctions. Clinton has called her policy towards the agreement “distrust and verify,” adding, “we should anticipate that Iran will test the next President. They’ll want to see how far they can bend the rules. That won’t work if I’m in the White House.”

In the February 11, PBS Democratic debate she said, “I think that we have achieved a great deal with the Iranian Nuclear agreement,” but in highlighting other facets of Iranian-American foreign policy, added that, “I don’t think that we should promise or even look toward normalizing relations, because we have a lot of other business to get done with Iran.”

Sanders has highlighted that most of the strongest opponents of the Iran nuclear agreement are the same officials who were strong proponents of the war in Iraq, arguing that such military-led initiatives have been catastrophic for American foreign policy.

On the other side of the aisle, Republican candidates Cruz and Trump have stated that the agreement with Iran is a terrible deal for the U.S. and our allies and will only increase the pace at which Iran obtains a nuclear weapon. Last September, Cruz detailed his reasons for believing the deal will not work, and in the Fox News/Wall Street Journal debate on November 15 last year, he went so far as to say that “Under [Clinton’s] leadership, and Obama’s leadership, Iran is getting $100 billion dollars, and on the verge of getting a nuclear weapon.”

In the February 13, Republican debate in North Carolina, Trump said, “the Iran deal is one of the worst deals I have ever seen negotiated in my entire life. It’s a disgrace that this country negotiated that deal.” But like most of his Republican colleagues opposed to the agreement, the candidate has posed no real alternative to successfully prevent the Iranian government from obtaining nuclear weapons.

While it is never safe to assume that what a candidate says on the campaign trail will translate into actual policy once they are sworn into office on January 20, their rhetoric now does paint a general picture as to where the next president may lead U.S. foreign policy. Therefore, a few things are safe to assume come inauguration day. First, all candidates from both parties would most likely seek a coalition force of Western and Arab states to combat Daesh. Secondly, if either of the Democratic candidates is elected, a continuation of the current Iranian nuclear deal is probable. If either of the Republican candidates takes the White House, they will probably fight to have the Iran deal nullified and seek to create a new agreement.

Candidates’ stances on other issues such as national security and immigration will be covered in future articles.