Taroudante - A billboard in St. Augustine, Florida, has caused international outrage for its discriminatory message that criticizes Islam. 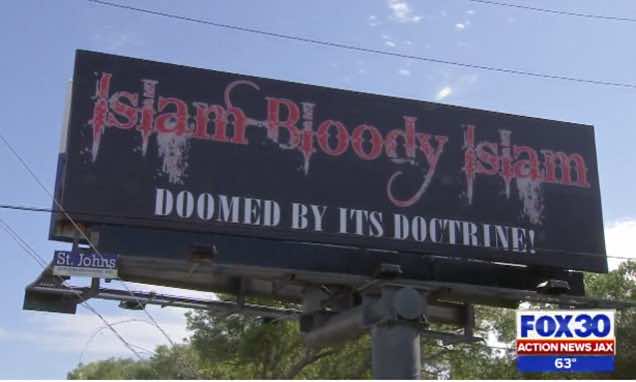 Taroudante – A billboard in St. Augustine, Florida, has caused international outrage for its discriminatory message that criticizes Islam.

The billboard along A1A which reads “Islam Bloody Islam, Doomed by its Doctrine,” has brought many people together from all over the world to denounce hate speech.

The words ‘Islam Bloody Islam’ are written in a red, tattered font on a black background across the 14-foot high sign.

Angered by the billboard, Becky Williams started a petition calling on the owner to take it down.

21,728 supporters have already signed the petition including 3,917 from Florida.

The petition’s owner said that she was horrified to see “something so hateful” put up in his community, stressing that no one “should be forced to see this offensive message on their way to work or school or just going about their day.”

“We should always stand up for those in our community who are shown hatred and intolerance,” Williams said, adding that “We should be outraged that a billboard with this message could in any way represent our community as a whole.”

Among the many people who signed the petition, Reno D., wrote witty comment that reads, “We’re a tourist town and insulting any of our visitors in large letters on a major road is a seriously rotten welcome. Bigotry is bad for business, bad for our community, and bad for our country.”

County leaders released on Tuesday a statement in response to the opposition, saying that the sign is legal and there’s nothing they can do about it.

“In response to concerns within the community, St Johns County investigated the billboard located at A1A and Seashore Avenue and determined it to be in compliance with all state and local code enforcement laws regarding signage,” the statement reads.

The statement added that “While its message may be offensive for some members of our community, it is protected under the First Amendment to the U.S. Constitution, which precludes the county from taking action.”

Anas Benjelloun, Imam of the Islamic Center of St. Augustine, said that many were shocked because the sign didn’t reflect the St. Augustine he and other members of the Muslim community know.

Benjelloun said the sign could lead to violence, as “Hate speech leads to hate crimes.”