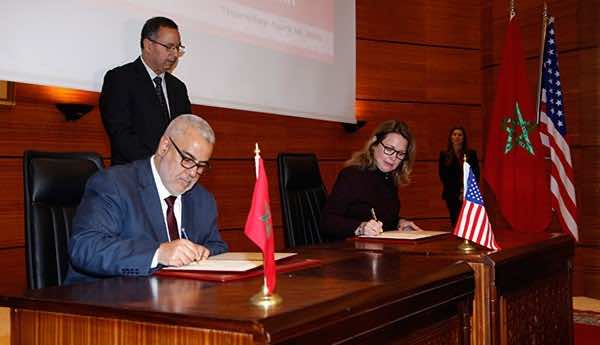 Medias24 reported that the declaration’s signing ceremony occurred in Rabat, with Moroccan officials, including the head of government, Abdelilah Benkirane, and the president of the MCC, Dana Hyde, in attendance at the foreign ministry’s headquarters.

The projects outlined in the agreement constitute the second portion, or charter, of an agreement MCC signed with Morocco in December 2012, which awarded the kingdom USD 697.5 million for investments in human capital and related initiatives. The provisions listed on the second charter will be carried out by Moroccan institutions over the course of 20 years and benefit approximately 2.2 million people in that time period.

In his speech at the ceremony, Benkirane said the programs prove the depth of the relationship between Morocco and the United States. The head of government also pointed out that both programs align well with Morocco’s national social and economic development strategy for the coming decades.

The educational project was budgeted USD 220 million and will improve the quality and relevance of secondary education and vocational training especially for young Moroccans, who espouse a chronically high unemployment rate of over 20 percent, according to international economic data compiled by the website Quandl.

Secondary schools will recieving USD 122.6 million of the budget of the program to implement a new and decentralized organization model in order to enhance the educational centers’ capacity to repair and maintain their classrooms and assess the progress of their students.

Another USD 170.4 million of funding will finance projects organized by actors in the public and private sectors creating vocational training programs, contribute to the establishment of an observatory for  the job market, and help young people, especially young women, successfully integrate into the economy.

The second program the MCC signed off on concerns “property productivity” and aims to increase the investment attractiveness of industrial and rural properties and develop a national strategy for the real estate market in the coming years. The project will also provide real estate buyers and sellers the tools they need to properly value their assets.