Taroudante - A college student originally from Iraq was removed from a Southwest Airlines flight in California earlier this month after another passenger panicked when she heard him speaking Arabic. 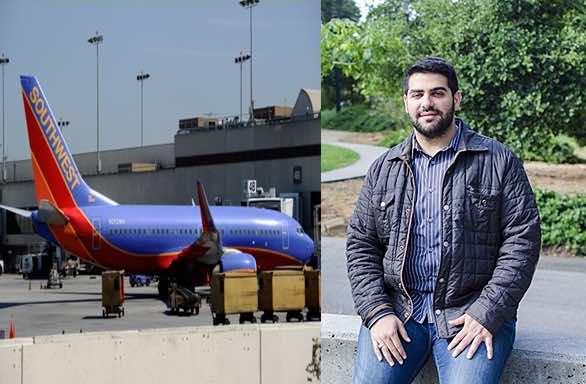 By
Larbi Arbaoui
-
Larbi is a freelance writer and assistant editor at Morocco World News.
Apr 18, 2016
Spread the love

Taroudante – A college student originally from Iraq was removed from a Southwest Airlines flight in California earlier this month after another passenger panicked when she heard him speaking Arabic.

Khairuldeen Makhzoomi, a 26-year-old student at the University of California, Berkeley, said that the incident started when he was speaking in Arabic with his uncle before flying back home to Oakland.

The Iraqi student said that he was telling his uncle about the dinner he had attended at the Los Angeles World Affairs Council with Secretary-General of the United Nations Ban Ki-moon. A woman heard him end the conversation with “Inchallah,” and moved from her seat to come back with the police.

“I was very excited about the event so I called my uncle to tell him about it,” he said.

“I just called him and talked to him about it and everything, and he told me to call him when I get to Oakland, and I said, ‘insha’Allah insha’Allah (God willing),” he added.

Makhzoomi knew that something was wrong as soon as he finished his phone call and saw that the woman who was sitting in front of him had abruptly moved towards the airplane door.

“That is when I thought, ‘Oh, I hope she is not reporting me,’ because it was so weird,” Makhzoomi said.

He said that the police who escorted him out of the plane addressed him first in Arabic before he switched to English asking him “Why were you speaking Arabic in the plane?”

Incidents similar to Mr. Makhzoomi’s expulsion from the plane have been increasing in the U.S., particularly over the last year.

According to Zahra Billoo, the executive director of the San Francisco Bay Area office of the Council on American-Islamic Relations, at least six cases of Muslims being pulled off flights had been recorded this year alone.

Makhzoomi says he has yet to receive an apology from Southwest Airlines since he was kicked off the April 6, flight.