Rabat -  Princess Lalla Salma on Monday inaugurated the retrospective exhibition of Alberto Giacometti at the Mohammed VI Museum of Modern and Contemporary Arts in Rabat. 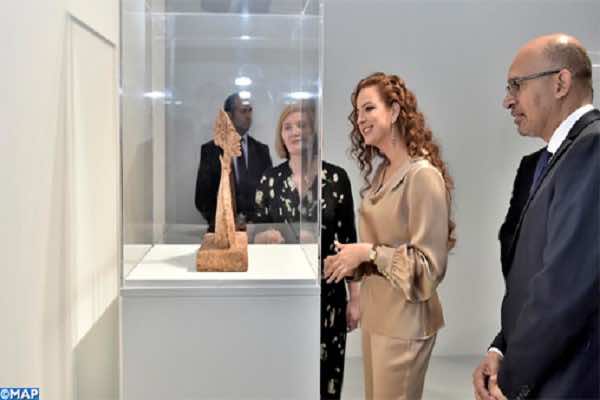 Rabat –  Princess Lalla Salma on Monday inaugurated the retrospective exhibition of Alberto Giacometti at the Mohammed VI Museum of Modern and Contemporary Arts in Rabat.

Held under the High Patronage of King Mohammed VI on April 20 through September 4, the exhibition is the opportunity to discover the career and the singular style of this artist (1901-1966).

Upon her arrival at the museum, Princess Lalla Salma reviewed a detachment of the Auxiliary Forces who made the honors before being greeted by Minister of Economy and Finance, Mohamed Boussaid, Minister of Culture, Mohamed Amine Sbihi, and French Minister of State for European Affairs, official representative of the President of the French Republic, Harlem Désir.

Her Royal Highness was also greeted by French Minister of State for State Reform, Jean-Vincent Placé, France’s Ambassador in Morocco, Jean-François Girault, Ambassador of the Swiss Confederation in Morocco, Massimo Baggi, President of the National Museums Foundation, Mehdi Qotbi, President of the Giacometti Foundation, Olivier Legrand, wali of the Rabat-Salé-Kenitra region, Abdelouafi Laftit, and other Moroccan and foreign figures.

The Alberto Giacometti retrospective exhibition is held at the “Farid Belkahia” exhibition hall in a chronological journey that highlights the main themes of the reflection of the artist from Paris to Stampa (from traditional sculpture to Parisian avant-gardes) up to the mature works through Africa in the works of Giacometti.

On this occasion, a catalog and a commemorative postal stamp of the exhibition were presented to Princess Lalla Salma, who posed for a souvenir photo with members of the Giacometti Foundation and the Mohammed VI Museum of Modern and Contemporary Arts.