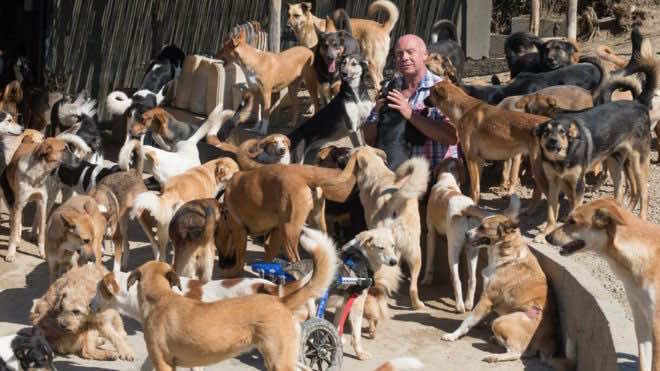 By
Larbi Arbaoui
-
Larbi is a freelance writer and assistant editor at Morocco World News.
Apr 20, 2016
Spread the love

On April 14, BBC published the inspiring story of Karl Scarr, 52, who decided to set up a sanctuary in Tangier in 2012 after a visit to the country, where he came across many abandoned dogs that were treated with “cruelty and abuse.”

During his visit to Morocco, Karl Scarr saw that many dogs were homeless and hungry. His unconditional love for dogs persuaded him to give up his taxi and build a giant kennel for 150 dogs, where he subsequently moved in to live with them.

The former zoologist put up the huge 33-foot doghouse, and started working with other charities and schools to improve animal welfare in Morocco.

To show his love for dogs, Scarr treats them like ‘guests at a five-star hotel’, even letting them cuddle with him under his blanket.

“I literally have no space or time to myself, and life in a kennel isn’t easy,” he said.

“Being the leader of a pack this size requires complete concentration and vigilance at all times, watching out for deadly scorpions and snakes, or breaking up fights before they become serious,” he added.

Despite the tiring task and the risks it poses, the former zoologist said that he is ready to sacrifice in order “to protect these wonderful animals, most of which have either been abused, starved, abandoned, or simply left for dead.”

Being a leading expert on dog behavior, Scarr has written three books on teaching owners how to raise their animals well.

To keep feeding the dogs and provide health care for the sick and abused dogs, Scarr relied on donations from philanthropists to support his humane initiative.