Rabat - Shin Bet, an Israeli security service, dismantled six members of what they called a "Jewish terror network" in the West Bank on Wednesday, according to The Times of Israel. 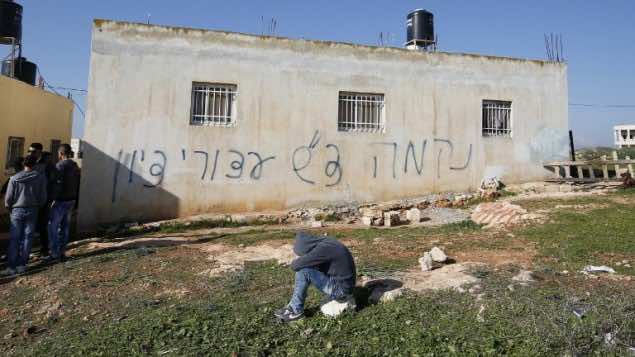 Rabat – Shin Bet, an Israeli security service, dismantled six members of what they called a “Jewish terror network” in the West Bank on Wednesday, according to The Times of Israel.

The six men had been suspected of carrying out several attacks on Palestinians, including the firebombing of buildings with civillians inside, the service said in a statement.

Three of the arrested suspects were named: Itamar Ben Aharon and Michal Kaplan, both 20 years old and from the settlement Nahliel, along with Pinhas Shandorfi, 22, a resident of a settlement called Kiryat Arba.

Of the three others, one was a soldier for the Israeli Defense Forces (IDF) and two were minors: one born in 1999 and one born in 2000. Isreali laws prohibit the public release of the names of arrested minors and a military court banned publication of the soldier’s identity.

“During the latter half of 2015, there were a number of terror attacks and violent incidents against Palestinians in the Gush Talmonim region,” the Shin Bet said, according to The Times. “Two notable attacks were against buildings that had Palestinians inside.”

Some of the group’s members were issued administrative restraining orders before the end of Shin Bet’s investigation on the danger they posed to Palestinians. Indictments will be filed against the suspects in the near future, the security service said.

Last April, Shin Bet and Israeli police forces began investigations on the potential existence of a Jewish terror organization. Interrogations led the suspects to admit to “terror activities” including attempted attacks against Palestinians inside buildings, attacks targeting other minorities, the arson and vandalism of Palestinian cars and more.

“Reenactments in the field and the confessions of the suspects revealed a violent and extremist network, which systematically attacked Palestinians and their property while fully aware of the possibility of killing someone, even after the results of the arson in Duma, and were even inspired by it,” the Shin Bet said.

The service referred to a July 2015 arson attack on a home in Duma, killing three members of a Palestinian family and seriously injuring a fourth. After the incident, the Shin Bet rounded up dozens of suspected Jewish extremists. By January, prosecutors indicted two suspects over the firebombing in Duma.

According to the Shin Bet, the members of the group were behind a June 20, 2015, attack on a Palestinian farmer whom they had beaten with sticks and subjected to tear gas.

Last November the terrorist suspects allegedly threw firebombs called Molotov cocktails into a house in the village of al-Mazra’a al-Qibliya with a Palestinian family was sleeping inside. Disaster was averted when one of the firebombs bounced off the window of the home instead of entering. They sprayed “Revenge,” “Death to the Arabs,” and “Jews wake up” on the family’s home, the Shin Bet said.

A month later, the gang’s members threw military grade tear gas grenades into a house in Beitillu to avenge the arrests of Jewish activists in an investigation of the Duma attack. The father woke up to the sound of the attack and immediately evacuated his family from the house – including his newborn son – when he had difficulty breathing. The attackers sprayed “Revenge, regards from the prisoners of Zion” on a house nearby.

A number of car arson attacks in the past couple of years, including the torching of a car in Beitillu in October 2015, and another in July 2014, were attributed to the terrorists.

“The interception of the network blocked many attacks that could have caused much more serious outcomes or even cost peoples’ lives,” Shin Bet said. “This development is another stage in the continuing effort to thwart Jewish terror infrastructure in the last year that has brought a significant drop in the scope of Jewish terrorism activities.”