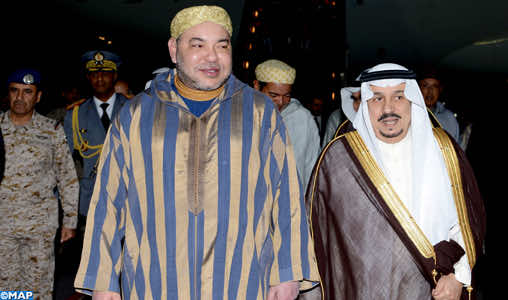 “What hurts you hurts us, and what affects us affects you”, the Sovereign said in a speech delivered, Wednesday in Riyadh, at the opening ceremony of the Morocco-GCC Summit, adding that to “defend our security is not only a shared obligation, but it is also a collective, indivisible one.”

Morocco has consistently sought to demonstrate this in all situations and circumstances. The aim has been to stand up to all threats in the region, as in the First Gulf War, the operation in Yemen to restore legitimacy and the ongoing security and intelligence cooperation, the King recalled.

“This is a serious situation which is compounded by egregious, misleading generalizations and insincerity, as shown by expressions of friendship and alliance on the one hand, and stabbing in the back, on the other, the Monarch warned, adding that “we are facing conspiracies which seek to undermine our collective security.”

They want to destabilize the few countries which have managed to safeguard their security, stability and political systems, he noted, citing in this respect Gulf countries, Morocco and Jordan, which are oases of peace and security for their citizens and a factor of stability in their respective regions.

“We are all facing the same perils, the same threats, though their origins and manifestations may differ,” the King reiterated, adding that the hostile plots which “seek to undermine our stability are continuing; they will not stop.”

In this respect, the monarch explained that several countries in the eastern part of the Arab world have been torn apart and destroyed; today, it is the western part which is targeted, and the “most recent of these conspiracies has been hatched against the territorial integrity of your second home, Morocco.”

“There is nothing new in this. Morocco’s opponents are using every means, directly or otherwise, as part of their thinly-veiled maneuvers,” he noted, stressing that depending on the circumstances, they try to delegitimize Morocco’s presence in its Sahara, promote the independence option and the separatist thesis, or undermine the autonomy initiative, which the international community has described as serious and credible.

The Morocco-GCC Summit is being held at a difficult time, the King said, recalling that the Arab region is being rocked by attempts to change regimes and divide states, as is the case in Syria, Iraq and Libya. As a result, many of the sons and daughters of the Arab homeland have either been uprooted, displaced or killed.

“What has been described as the Arab Spring has caused destruction, chaos and human tragedies,” the monarch said, adding that “now we are witnessing a calamitous autumn, with attempts to lay hands on what remains of Arab countries’ resources and spoil successful experiences, like that of Morocco, by undermining its outstanding national model.”

“We respect the sovereignty of States, their choices and their freedom to establish and promote relations with partners of their own choosing. We are not here to call anybody to account for the political or economic choices they make,” the King stressed.

But he noted that there have been new alliances which may lead to disunity and a reshuffling of roles and functions in the region. “In fact, these are attempts to foment strife and create chaos, and no country would be spared. It could have serious consequences for the region, even the world at large,” he pointed out.

Though it remains committed to its strategic relations with its allies, Morocco has, in recent months, sought to diversify its partnerships at political, strategic and economic levels, the King said.

“The convening of this Summit is not targeting any party in particular, least of all our partners. It is a natural, logical initiative by countries which are defending their interests, as all countries do. My brothers in the Gulf bear the costs and consequences of the successive wars in the region,” the Sovereign said.

For the monarch, now is the time for honesty and truth. The Arab world, the Monarch said, is going through a difficult period as what some States are experiencing is not exceptional; it is all part of well-planned schemes that target us all.

Terrorism does more than just tarnish the reputation of Islam and Muslims; it is also being used by some people as a pretext to divide our States and foment strife in them, the King underlined.

For this reason, the different schools of Islamic jurisprudence need to engage in a frank, in-depth dialogue to correct misrepresentations, convey the true image of Islam and uphold, once again, the tolerant values of our faith, the Sovereign said.

In this regard, he said that what is at stake is not the situation in a particular country as much as the need, for all of us, to be aware of the challenges confronting us and to show genuine determination to renew our strategic pact with our partners, on the basis of clear determinants that can govern our relations in the decades to come.

“This is a turning point; a watershed moment between what we want and what the others want us to be”, the King said, adding that today, “more than ever, we need clear, unified stances between all Arab States. Either we stand together, like a solid structure, whose parts reinforce one another, or we become something we do not want to be.”