Rabat - The Islamic Society of Mid-Manhattan mosque hosted some 100 Jews and Muslims for a multifaith Jewish Passover Seder on April 14, according to the Jewish Telegraphic Agency. 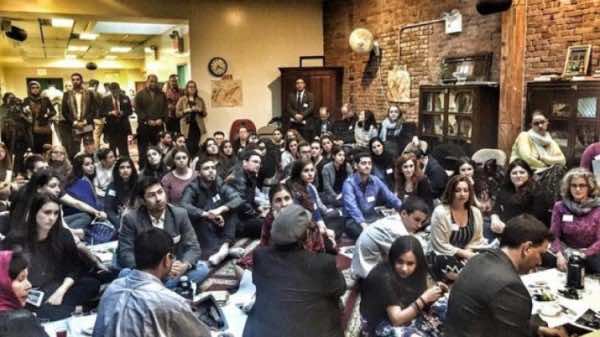 By
Larbi Arbaoui
-
Larbi is a freelance writer and assistant editor at Morocco World News.
Apr 20, 2016
Spread the love

Rabat – The Islamic Society of Mid-Manhattan mosque hosted some 100 Jews and Muslims for a multifaith Jewish Passover Seder on April 14, according to the Jewish Telegraphic Agency.

A week before the important Jewish holiday of Passover, a mosque in midtown Manhattan opened its doors to New Yorkers of various faiths to celebrate the occasion.

The same source said that the gathering took place thanks to the coordination of the NYC Muslim-Jewish Solidarity Committee.

Rabbi Allison Tick Brill of Temple Emanu-El, a large Reform congregation in Manhattan, described the gathering as the first one of its kind in New York.

“I don’t believe anything quite like this has happened in New York before,” she said. “It is particularly powerful to celebrate Passover here at this mosque because unfortunately, Muslim Americans are made to feel strangers in their own country.”

Ahmed Dewidar, Resident Imam at the Islamic Society of Mid-Manhattan and a graduate of Al-Azhar University, welcomed Jewish guests to the mosque.

“Isn’t it beautiful to have our Jewish brothers and sisters in the mosque?” Imam Dewidar said. “I think we should be proud of our community here in New York.”

Passover, or Pesach, is a significant, biblically derived Jewish festival that commemorates the liberation of the Jewish people from slavery in Egypt and their freedom as a nation under the leadership of Moses.

During Passover, Jews celebrate with the Passover Seder, which is a ritual feast that involves a retelling of the story of the Israelites’ liberation from slavery. The meal is marked by many symbolic elements and customs unique to the holiday. In Israel, Passover lasts seven days and Jews hold a Seder on the first night. Outside of Israel, Passover is eight days and Jews hold Seders on the first two nights of the holiday.