New York - The Paris climate agreement signing ceremony kicked off on Friday at the United Nations Headquarters in New York, in the presence of Princess Lalla Hasnaa, who is representing HM King Mohammed VI. 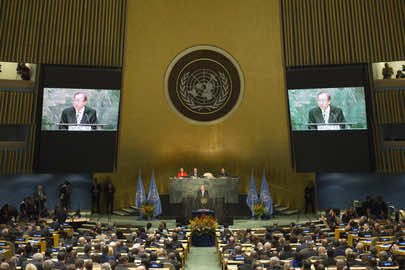 New York – The Paris climate agreement signing ceremony kicked off on Friday at the United Nations Headquarters in New York, in the presence of Princess Lalla Hasnaa, who is representing HM King Mohammed VI.

As many as 170 countries are expected to sign the Paris Agreement on climate change.

The Paris Agreement was adopted by all 196 Parties to the United Nations Framework Convention on Climate Change at COP21 in Paris on 12 December 2015.

In the agreement, all countries agreed to work to limit global temperature rise to well below 2 degrees Celsius, and given the grave risks, to strive for 1.5 degrees Celsius.

During the ceremony, Princess Lalla Hasnaa was accompanied by the Minister of Foreign Affairs and Cooperation, Salaheddine Mezouar, the Minister Delegate in charge of Environment, Hakima El Haite, the High Commissioner for water, forests and the fight against desertification, Abdeladim El Hafi, Morocco’s Ambassador to the United States, Rachad Bouhlal, Ambassador Omar Hilale, Permanent Representative of Morocco to the United Nations, and COP22 Ambassador for multilateral negotiations Aziz Mekouar.