Brussels - Morocco and Belgium signed on Friday in Brussels an agreement on security and information sharing, according to Maghreb Arab Press (MAP). 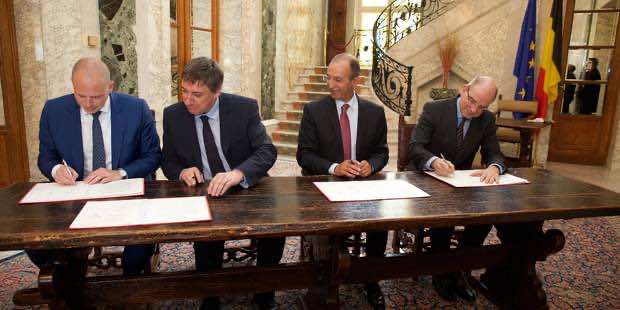 Brussels – Morocco and Belgium signed on Friday in Brussels an agreement on security and information sharing, according to Maghreb Arab Press (MAP).

Moroccan and Belgian officials praised the great impetus given to cooperation between the two countries in the security field following the telephone conversation between King Mohammed VI and King Philippe of Belgium on November 23, 2015.

A joint statement issued at the end of a working visit by Interior Minister Mohammed Hassad and Director General of National Security and Territorial Surveillance Abdellatif hammouchi at the invitation of Belgian Deputy Prime Minister and Minister of Interior and Security Jan Jambon said that both sides held a working meeting, which was attended by Belgian Justice Minister Koen Geens and Secretary of State for Asylum and Migration, Theo Francken.

During this meeting, the Moroccan delegation reiterated to Jan Jambon Morocco’s solidarity with Belgium following the heinous terrorist attacks that struck Brussels in late March, and expressed the full readiness of Moroccan security services to strengthen consultation and information sharing with their Belgian counterparts.

Discussions focused on issues of mutual interest, including cooperation in the fight against terrorism and organized crime, as well as the management of migration flows.

Following this working meeting, both sides signed a Memorandum of Understanding in which both sides pledged to strengthen operational cooperation mechanisms between the security services of both countries.

On this occasion, Jan Jambon hailed the comprehensive and humanist aspect of the new migration policy adopted by Morocco and the leadership of the Kingdom and its key partner role in the fight against terrorism and organized crime.