Rabat - Moroccan-Dutch supermodel Imaan Hammam went topless for the May issue of the French version of the famous magazine Vogue. 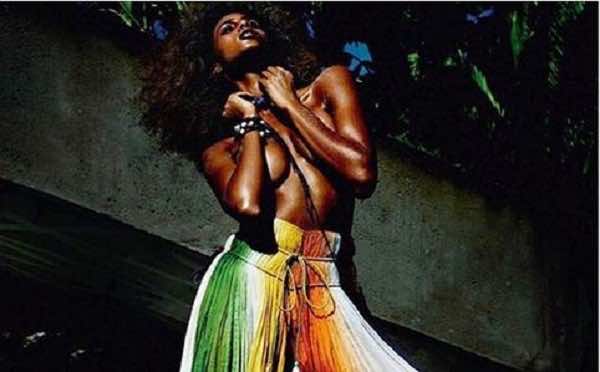 Rabat – Moroccan-Dutch supermodel Imaan Hammam went topless for the May issue of the French version of the famous magazine Vogue.

During her last shoot, the Dutch model of Moroccan origins appears topless before the lenses of Peruvian fashion photographer Marco Tostino.

In this issue, to be published in May, Hammam poses in different positions wearing very bright and cloroful spring clothes.

The Amsterdam-born fashion model posted some of these photos to her Instagram account, garnering thousands of likes and comments.

With a Moroccan mother and an Egyptian father, the model grew up in the Netherlands, where she was pursuing her studies before appearing on the American Vogue cover, as the only new face among a sea of famous models.

In April 2016, Hammam won Couturesque Magazine’s Model of the Year competition, receiving more than half of the public vote against heavyweights Lucky Blue Smith and Bella Hadid.

At Brooklyn’s Afropunk Festival in 2014, Hammam revealed that she doesn’t use too much make up, but she uses saffron and honey, the secret recipe of her beauty.

“Y’know, there’s a thing you cook with, called saffron. Mix it with honey and then apply it to your face like a mask for five minutes. Wash it off and your face is beautiful!” Hammam was quoted by Vogue as saying.