Taroudante - A group of Germans who seeking to learn about Islam visited a mosque headed by the Islamic Society of National Vision (IGMG) in Cologne, Germany on April 18. 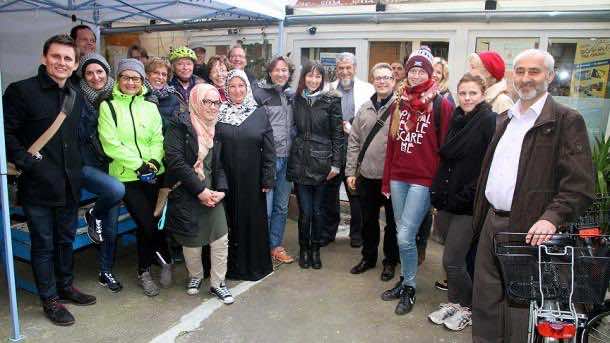 By
Larbi Arbaoui
-
Larbi is a freelance writer and assistant editor at Morocco World News.
Apr 25, 2016
Spread the love

Taroudante – A group of Germans who seeking to learn about Islam visited a mosque headed by the Islamic Society of National Vision (IGMG) in Cologne, Germany on April 18.

The group was supervised by Thomas Bonig, president of Kulturklüngel association.

During their visit, the Germans asked questions about many aspects of Islam. They interviewed Muslims in the mosque about the Prophet Muhammad, the month of Ramadan, and the daily lives of Muslims.

The founding president of the association of the mosque and member of the Cologne harmonization meeting, Ali Esen, welcomed the initiative and thanked the visitors who took the time to learn about Islam from true Muslims at their place of worship.

However, Esen said that some circles unfairly target Islam and Muslims, expressing his “worries” on the rise of Islamophobia.

The president of the association said that at the end of the visit, some guests, including men and women of all ages, told him they saw Islam differently and had been enlightened about the true image of Islam.

After the terrorist attacks that targeted Europe, mainly France, the xenophobic group PEGIDA, the “Patriotic Europeans Against the Islamisation of the Occident,” multiplied its activities in Germany. They accused Angela Merkel of destroying their homeland by allowing in 1.1 million asylum seekers in last year.

Despite the negative image that is being propagated by Western media after ISIS and other extremist groups committed heinous acts of violence in the name of Islam, the number of Muslims is expected to increase largely by the end of this century.

According to the Pew Research Center published on December last year, Islam is the fastest-growing major religion in the world.