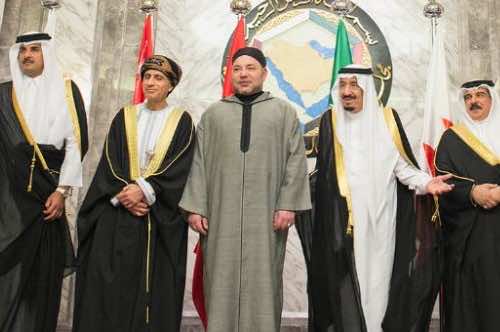 Ever since Morocco’s independence over six decades ago, the Moroccan royal family has striven to build privileged personal relations with its Gulf counterparts. Over the years, the bonds of brotherhood built between Morocco and the six Gulf monarchies have born their fruit and immunized the monarchies against generational change. Since his ascension to power in 1999, King Mohamed VI has followed the same policies adopted by his late father King Hassan II.

Despite the privileged personal ties between the Moroccan royal family and its Gulf counterparts, at the institutional level these strong relationships have not translated into genuine integration of the economies of Morocco and the Gulf countries. For far too long, these relations were limited to the provision of financial assistance by the Gulf countries to Morocco or the provision of security assistance from Morocco to the Gulf states.

However, since the start of the Arab Spring, observers have noted a real willingness in the leaders of both sides (Morocco and the GCC) to take their relations to a higher level. This translated into a call by Saudi Arabia to include both Morocco and Jordan in the GCC block. Though this attempt did not come to fruition, it signaled the beginning of an increased effort to create a strategic economic and military alliance among Morocco and the six GCC countries.

Towards building a strong strategic alliance

This first Morocco-GCC summit gives substance and form to all previous attempts made in the past to breathe new life into the partnership linking these countries. In addition, there exists the potential for Saudi Arabia to suggest the possibility of including Morocco in the GCC itself.

The timing of this summit indicates a real willingness on behalf of Morocco and its GCC allies to build a new win-win strategic partnership.

An essential element characterizing the relations between Morocco and its Gulf counterparts is, unlike other relationships, the strong ties between their leaders. As King Mohammed VI said in his speech during the summit, these relations are not subjected to narrow calculations or transient interests that may fade away with the coming of a new ruler, a new generation, or a new administration.

As was clearly stated by King Mohammed VI, Morocco has every interest in preserving the stability of its Gulf allies. Any instability in these countries would have serious repercussions in Morocco. One of the most serious of which would be a steep increase in oil prices with devastating effects on Morocco’s economy. The second serious repercussion would be a serious drop in the GCC’s investments in or financial assistance to Morocco. As these countries would devote more resources to their defense budget, little money would be left to invest in countries such as Morocco.

It is this common destiny that explains why the Gulf countries, especially Saudi Arabia, have never failed Morocco when the kingdom has faced major political or economic problems. For example, few remember the role Saudi Arabia played in saving the Moroccan economy from bankruptcy in the early 1980s when the government was short on the funds needed to pay its employees. Saudi Arabia also helped Morocco build the wall of sand in the Sahara in the 1980s at the height of its war against the Polisario.

In light of the unprecedented instability rocking the Arab world and the Arab League’s inability to give a strong voice to its member states, Morocco and the Gulf leaders have decided that the time has come to give their privileged partnership a more institutionalized impetus. Morocco’s decision to forgo its right to host the Arab League summit last March must be understood in this context. As King Mohammed VI put it, what the Arab world and its peoples need are not monotonous meetings and grandiloquent speeches that never translate into reality.  Rather, the Arab people need leaders who have a vision and are willing to lay the ground work for a better future for their citizens.

The GCC-Morocco partnership responds exactly to this need for coordinated action guided by a sense of common interests and destiny. The Gulf countries and Morocco share the same interests and face the same destabilizing threats. Both sides feel that they can no longer rely on their long-time strategic allies in the West and that time has come for them to forge ahead with new strategic alliances that are likely to preserve their respective countries’ stability.

With the new role that Iran will be allowed to play in the Middle East thanks to Washington’s decision to thumb its nose at its Gulf allies, the latter need a country such as Morocco to help them face the destabilizing effects of Iran’s policy in the region. Morocco’s participation in the Saudi-led coalition against the Houthi rebels in Yemen constitutes the first step in this bourgeoning partnership between Morocco and the GCC countries. In the absence of the American umbrella, Saudi Arabia and its Gulf neighbors are in need of a trusted strategic partner they can resort to in times of major crisis. Given the privileged strong relationship between Morocco’s king and his Gulf counterparts, Rabat is viewed as one of the major players in the GCC future security equation.

Within the same security context, Morocco will also play a major role in helping the GCC avert the terrorism threat posed by the likes of ISIS, Al Qaeda, and the Iranian-backed Hezbollah, in addition to other proxy groups operating in Syria and Yemen. Over the years, Morocco has come to play a leading role in the global fight against terrorism. This was evident in the role Morocco played in thwarting major terrorist attacks in Europe and in locating Abdelhamid Abaaoud, one of the masterminds of the Paris terrorist attacks last November. Given the expertise gained by Morocco’s intelligence services in information sharing and in tracking terrorists, the GCC countries are keen to learn from Rabat’s experience and secure their borders against terrorist threats.

Additionally, with the leading role it has been playing in Africa in recent years, Morocco can also serve as a catalyst for the GCC’s investments on the African continent. In this regard, Rabat has a great deal of experience to offer its GCC counterpart.

On the other side, Morocco also needs its Arab allies to solidify the strides it has made in recent years in terms of infrastructure and economic development. With the many major economic programs Morocco has launched in recent years, such as Green Morocco and its ambitious green energy policy, the country needs a steady flow of cash in order to sustain its projects. Given the strong ties between the Moroccan royal family and its Gulf counterparts, Morocco is aware that it can no longer rely on its traditional economic partners, such as the European Union and the United States. Morocco is no longer ready to abide by the perceived unfair conditions that these allies impose every time they provide the country with a loan or make any investments.

While these financial contributions come often with interference in Morocco’s internal affairs and seek to serve these countries’ narrow interests rather than upholding Morocco’s economy, investments made by the GCC come with few strings attached. The new impetus given to the Morocco-GCC partnership since 2012 is already bearing its fruits with Morocco being among the highest recipients of GCC investments and financial aid. The cash flow provided to Morocco has not only helped the country sustain its economic projects, but also to ease social tensions.

Additionally, Morocco also needs the solidarity of its GCC allies in its long-standing diplomatic battle to secure its sovereignty over the Western Sahara. The economic leverage the GCC enjoys thanks to its oil has long enabled the Gulf countries to intercede in Morocco’s favor with the influential members of the Security Council, especially the United States. While in the past, the GCC’s support was tacit, with the Morocco-GCC summit the GCC countries’ support has been made public for the first time. Their backing will enable Morocco to be more assertive in dealing with the United Nations and other influential players.

With the Morocco-GCC partnership, this new block of monarchies will speak with a common voice and unified leadership that will help advance their respective agendas and defend their strategic interests. Given the nature of relations linking the leaders of these countries and their belief that they share a common destiny and face common threats, this new grouping may supersede the ineffective role that has been played hitherto by the crippled Arab League. In light of the threats facing the Arab world, giving form to the Morocco-GCC alliance has become a pressing necessity.