Rabat - Lahcen Haddad, Minister of Tourism was awarded "Tourism Personality of the Year 2015” by the Arab Center for Travel Media as part of the 8th annual Tourism Media Awards. 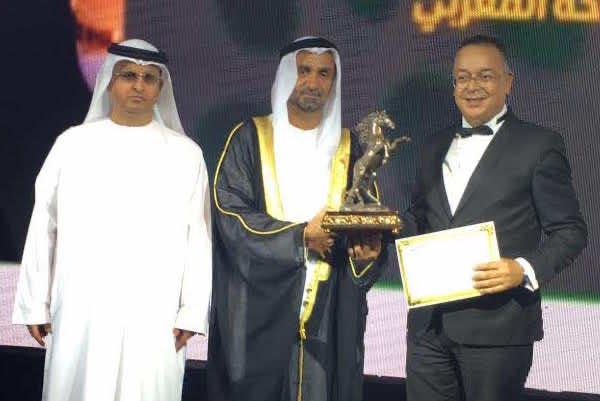 Rabat – Lahcen Haddad, Minister of Tourism was awarded “Tourism Personality of the Year 2015” by the Arab Center for Travel Media as part of the 8th annual Tourism Media Awards.

Haddad received the award on April 26 in Dubai at a ceremony in the presence of dedicated industry professionals and representatives of local, Arab and international media.

During the ceremony, Hussein Elmanay, President of the Arab Center for Travel Media said that the award pays tribute to Haddad “in recognition of his experience and his efforts for the development of Arab and local tourism.”

In his acceptance speech, Haddad emphasized the importance of tourism in Morocco.

“This award embodies the maturity of Moroccan [as a travel] destination and reaffirms the relevance of the vision established by Morocco to develop its [tourism] industry as a pillar of the national economy,” Haddad said.

The minister said that he is confident about the future of world tourism. “The culture of travel is increasingly rooted in [consumers’] habits. Tourism is a major factor in the global economic shift towards the service and entertainment industries,” Haddad said.

Haddad added that the challenge in the coming years will be the mobilization of policy makers to focus on innovations in the tourism industry.

Haddad won the award with a score of 4,569 votes following the Arab Center for Travel Media’s electronic voting process. The competition included 122 nominees listed in 23 categories and representing 18 Arab countries.