Rabat - A shocking video shows a group of people assaulting a man allegedly for wearing women’s clothing in the street in Meknes. 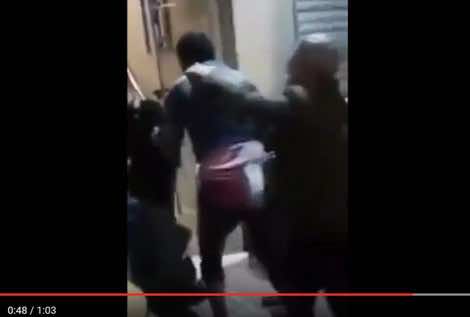 Rabat – A shocking video shows a group of people assaulting a man allegedly for wearing women’s clothing in the street in Meknes.

The attack was caught on video by a passer-by, who posted it on social media. It was later republished by international news websites.

The alleged cross-dresser was brutally attacked by a mob, whose  members seemed offended by the way he dressed.

The victim tried to escape the angry crowd but was grabbed by his “apparently feminine clothes.”

Insults are heard and the video shows the victim getting slapped by a passerby.

The scene reportedly took place in front of the terrace of a cafe in the city of Meknes.

The incident comes only few weeks after the release of the “homosexual couples” arrested after being subjected to a mob attack in Beni Mellal.

The arrest of the same-sex couples created a hot debate internationally with human rights organizations calling for the decriminalization of homosexuality in Morocco.

At the end of the video, some bystanders intervene to save the man from the crowd’s attacks.

The Moroccan penal code prohibits homosexuality as a criminal offense, designating it an illegal activity that can be punished with anything from 6 months to 3 years of imprisonment and a fine of MAD 120 to MAD 1200.