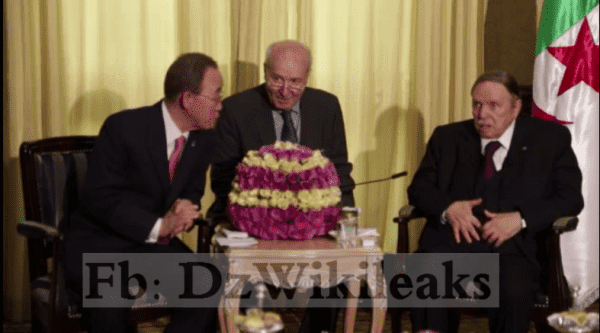 The video – which the sources say was recently leaked from excess footage of the Algerian leader’s press conference with United Nations Secretary General Ban Ki-moon in March – depicts Bouteflika struggling to produce words and pressing his hands against his stomach as Ki-moon tries speaking to him in French.

Both men are sitting on chairs while being photographed and filmed by the press present.

Bouteflika has suffered two strokes in recent years and, in 2011, Wikileaks revealed a communication from then U.S. Ambassador to Algiers, Robert Ford, who said a physician had told him that the president had fought stomach cancer into remission.

Government sources had earlier said the top leader visited France in 2005 and 2006 to seek medical treatment for a severe stomach ulcer.

After the leaks, which included over 250,000 documents from the U.S. Department of State, an Algerian diplomatic source quoted by Reuters denied Boutefika’s cancer affliction.

Some of the president’s closest political allies and associates have said they have not met with him in over a year, according to an article by The New York Times last December.

The president, who previously served as Algeria’s foreign minister, is currently serving his fourth term in the top public office, after new constitutional amendments – backed by Bouteflika, of the ruling National Liberation Front – allowed him to do so.

The Times reported mounting suspicions that a clique, led by the president’s brother, Said Bouteflika, had carried out a “soft coup” by running the country under the president’s name.