El Jadida - The Moroccan government and civil society are strongly committed to the fight against climate change, Ambassador of the European Union (EU) in Rabat Rupert Joy told MAP, on Wednesday in El Jadida. 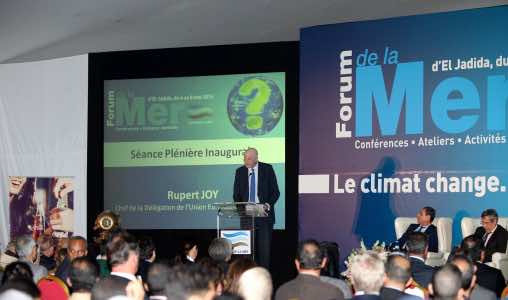 El Jadida – The Moroccan government and civil society are strongly committed to the fight against climate change, Ambassador of the European Union (EU) in Rabat Rupert Joy told MAP, on Wednesday in El Jadida.

This statement came on the sidelines of the opening ceremony of the 4th Forum of the Sea, taking place in El Jadida on May 4-8.

Morocco and the EU are working cooperatively on environmental issues, said the ambassador, stressing that the EU is committed to supporting Morocco to host the COP22, an event that represents a major challenge for Morocco and the whole world since it is aimed at following the action plan set up during the Paris COP21.

The EU has already taken several decisions to support Morocco at the COP22, notably in terms of logistics, coaching and financing, he said, adding that the EU and Moroccan Ministry of environment are conducting several joint projects to preserve the environment.