Cairo - Members of the Egyptian House of Representatives praised the quality and strength of the historical relations between Egypt and Morocco at all levels. 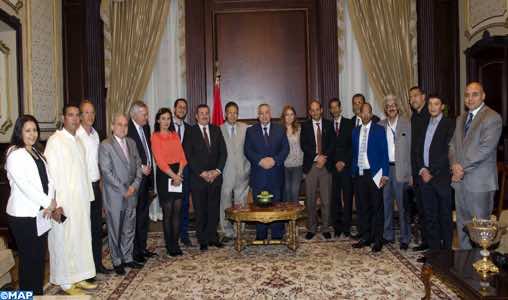 Cairo – Members of the Egyptian House of Representatives praised the quality and strength of the historical relations between Egypt and Morocco at all levels.

This statement came during a meeting of a delegation of Moroccan media professionals, currently visiting Egypt, with the first deputy speaker of the House of Representatives, Mahmoud Sharif, along with presidents of the Foreign Affairs, Arab Affairs, cultural and media Affairs Committees, Mohamed Al Arrabi, Saad Jamal and Oussama Haykal respectively.

Members of the Egyptian House of Representatives also hailed the historical cultural and spiritual exchanges, as well as the shared values of openness and tolerance between their country and Morocco.

President of the Foreign Affairs Committee Mohamed Al Arrabi expressed his aspiration to raise bilateral relations to a higher level, highlighting the role media can play in this area in both countries and in terms of supporting development efforts at Arab and regional levels.

Mahmoud Sharif, First deputy speaker of the House of Representatives, said that a delegation representing this institution would visit Morocco to establish friendship group between the two institutions.

Concerning the Moroccan Sahara issue, Mahmoud Sharif voiced his country’s support for Morocco, noting that Egypt supports dialogue to find a peaceful solution to this issue under the international law and good neighborliness.

For his part, Oussama Haykal praised the centuries-old relations between the two countries, saying that the existing agreements and cooperation programs between Egypt and Morocco in the media field are essential to build solid relations.

The Moroccan delegation started, last Friday, a visit to Egypt at the initiative of the Egyptian Embassy in Rabat, in collaboration with the Egyptian Tourism Ministry.