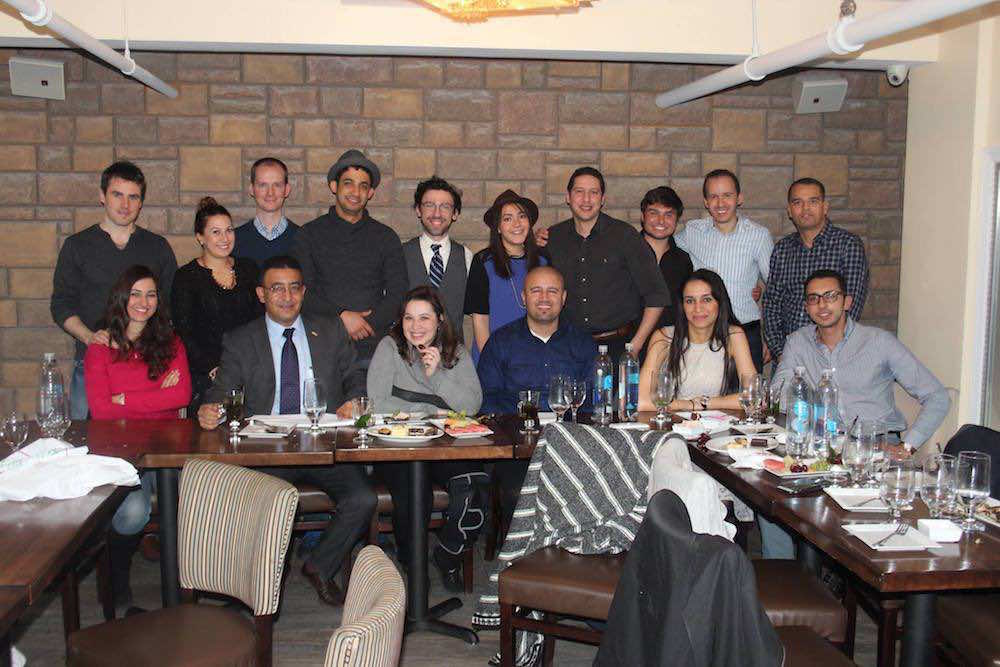 New York – The latest meeting in a series of dinners between young Jewish and Moroccan professionals in New York City was held on Saturday, April 9, at a Persian-themed kosher restaurant called “Colbeh,” graciously hosted by the restaurant’s Moroccan-Jewish owner, Simon Lahlou, and his family.

We had a big private room and our appetizers, desserts, and mint teas were complimentary- quite the reception! We feasted on mouth-watering kebabs, delicious rices (including a heavenly dish with cherries), savored ghormeh sabzi with beef, all the while making olives disappear… quickly.

Colbeh held a special sentimental value for some of the regular attendees, and using the venue as a place to celebrate new friendships added to the joyful memories. Our group expanded with the addition of new faces joined and some of the usual suspects returned to share in the camaraderie. We also took our intercultural adventure to a new level by having a special guest, our visiting Druze friend, who fit right in. If you have not heard Moroccans and Druze finishing one another’s cultural jokes in Arabic, you have not really lived, and probably have not really laughed either. I learned about Amazigh culture and language from one of the participants, and throughout the night many connections were made.

This was a dinner for making new memories and building a platform for continuity. Rather than merely exploring new connections and discovering our similarities and differences, we decided that we want to build a common future together as a group, that we want a community, and that we were ready to take our meetings to a new level.

Communities give a renewed set of belonging, but when created with genuine care and pleasure, they play another significant role: spreading that sense of belonging by inviting others to join, rather than self-insulating and fencing themselves off from others. A community that focuses on embracing otherness utilizes strong individual and cultural identities  to create common ground and positive definitions, something that is frequently missing in associations, private gatherings, and even countries.

A community based on friendships and mutual interests gives a respectful space to discuss ideas which can be challenged, supported, and perfected for exploring unorthodox projects, experimentation, growth, and the expanding of horizons. And all important conversations start over a great meal, because having serious discussions about the future on a hungry stomach has rarely led to anything good. We are building a community because we eschew fearmongering and pessimism. We believe in one another, we are ready to support one another’s dreams and goals and help bring them to fruition.

We stayed past closing hours not because we had to, but because we wanted to. We had started out as a small core group, with people coming and going over time, but everyone who comes always seems to enjoy themselves. Our commitment is to fun, to the pleasure of one another’s company, but also to the interest of accomplishing something good, of spending time with the people we have found and that we want to continue keeping in our lives.

What we all have in common is our curiosity, open-mindedness, and a shared belief that we can create the kind of life and future we want. It is not all outside our control in the realm of political decisionmaking, advertising, corporate practices, or overwhelming groupthink. We each individually brought our habits, backgrounds, passions, and interests to the table, and at the end of the evening we each walked away with more than what we had brought. We were eager to question our assumptions and beliefs, to explore new concepts, to travel far, but also to bring to the here and now the thoughts and possibilities from elsewhere.

Friendships are infectious. Laughter and fun are infectious. Building takes time; creating communities does not happen over night. But it does happen more and more with each meeting, with each opportunity, with each bite of delicious meat or pastry, with each crazy joke, with each meaningful conversation. When others see us spending time together as if we are genuinely at home and when we literally have to be dragged out of restaurants and still continue our conversation outside, never quite ready to say good night, they, too, will want to join in.

The alternatives to the troublesome tensions and factionalisms that tear our cities, our nations, our regions apart are not more jingoistic rhetoric, more countering with negative imagery, more underscoring of the failure of bad ideas – but actually having something to offer, and that something is an environment in which people want to live and are comfortable being themselves. They can have open and intense conversations, ask tough, uncomfortable questions without feeling cornered and uncomfortable, fool around and make jokes, and talk irreverently about cozy, familiar things.

The alternative to a struggle for power which has plagued groups and associations is inclusivity and the openness to all different possibilities. We are on the same page, we go with the flow, we explore, we try new things, and we get to know one another all throughout the process.

We start small and we have a ripple effect. We bring others in. We cause slight changes that may not be visible to an outside observer, but those changes create a norm, rather than an exception. One day, for many others, joining a gathering such as ours on a fun monthly night out will not be an exotic, slightly awkward experiment, but a normal part of life. And the more we do this, the sooner that moment will come. We are taking control. We are making a circle of friendship, and we will widen it with each event. We will eat our way to victory. Victory, of course, is the expansion and continuation of our community, which means we will just continue eating and laughing, non-stop. Who could say no to that?!