Taroudant - A new report issued on May 3 by the Spanish Coordinator of Organizations of Farmers and Ranchers (COAG) revealed that the agricultural sector in Spain depends on more than 200,000 migrant workers, a large number of them from Morocco. 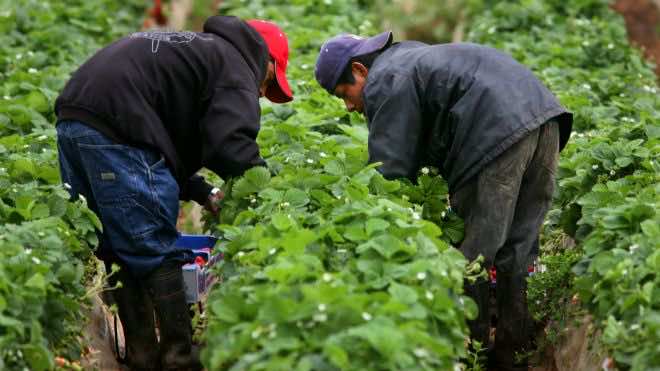 By
Larbi Arbaoui
-
Larbi is a freelance writer and assistant editor at Morocco World News.
May 8, 2016
Spread the love

Taroudant – A new report issued on May 3 by the Spanish Coordinator of Organizations of Farmers and Ranchers (COAG) revealed that the agricultural sector in Spain depends on more than 200,000 migrant workers, a large number of them from Morocco.

According to the report, there are about 71,587 Moroccan workers in Spain’s agricultural sector, as well as 59,830 Romanians. Both groups combined account for more than half of the total workers in the sector.

The Spanish countryside is home to workers from several parts of the world. Most workers migrated to Spain from Bulgaria, Lithuania, Poland, Portugal, Bolivia, Colombia, Ecuador, Ukraine and Pakistan, along with others from sub-Saharan African countries.

The same report revealed that Spain, a powerhouse in the production and marketing of food in Europe, would not have accomplished these agricultural activities without the labor of more than 200,000 foreign workers.

The same source added that Moroccans are the main extra-community group in strawberry production, representing more than 5,000 workers, after strong growth of 46 percent since 2012.

The COAG report recognizes the important role that immigrants play in rural development, especially since most Spaniards do not seek work in the agricultural sector.

According to the Spanish General Federation of Labor, migrant workers in the agricultural sector in the country still face many problems, including poor and seasonal work conditions, low wages and long working hours.

The Federation called on the Ministry of Agriculture to adopt an emergency plan to mitigate these issues given the fact that agriculture – along with tourism – is the backbone of the Spanish economy.