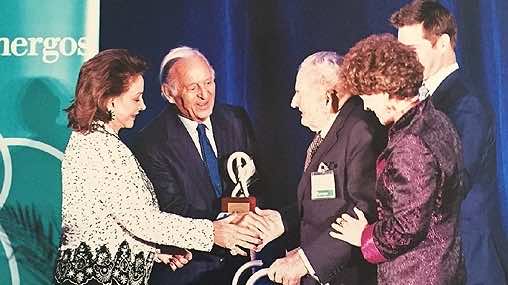 The prestigious award was given to the Moroccan philanthropists in the presence of hundreds of U.S. and international personalities from the political, philanthropic, diplomatic and Business sectors.

This award pays tribute to the work of the BMCE Bank Foundation, created in 1995 and, in particular, for its “Medersat.Com” educational program launched in 2000, which provided more than 55 remote villages across the kingdom schools, power, and reliable water supply.

Speaking about the project, Othman Benjelloun, Chairman and CEO of BMCE Bank, said “Medersat.com was established to give all children and adults in these areas a real chance to reach a level of education that will enable them to become positive forces for development and to be able to contribute to an environment of openness and tolerance in their own communities.”

Othman Benjelloun, Morocco’s richest man, made his fortune in the insurance sector and banking, with “Les Assurances Al Watania” and BMCE, which operates all over the world, including 20 African countries. With his company Finance.Com, he is expanding its activity in telecommunications, air transport and information technology.

The 83-year-old billionaire’s diversified business and investment profile is valued at around two billion dollars.