Rabat - Morocco and Lille midfielder Sofiane Boufal has been named on Monday best African player in France's Ligue 1 for the season 2015-2016. 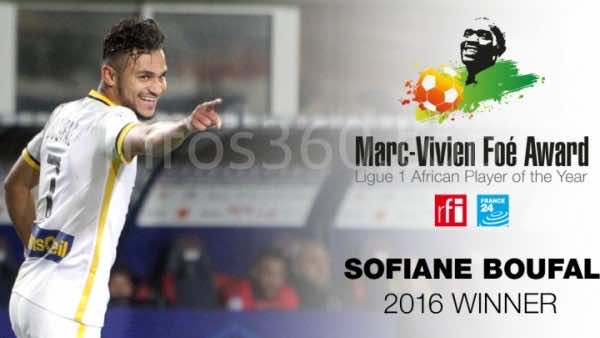 Rabat – Morocco and Lille midfielder Sofiane Boufal has been named on Monday best African player in France’s Ligue 1 for the season 2015-2016.

The 22-year-old beat Algeria and Lyon’s Rachid Ghezzal and Cheikh N’Doye of Senegal and Angers to win the Marc-Vivien Foe Trophy.

Boufal is the third Moroccan to win the prize, which is named after the Cameroonian international player that died at the age of 28 of a heart attack in 2003.

Despite his knee injury that forced him to be absent from the final two weeks of the French championship season, the Moroccan footballer beat out Algeria and Lyon’s Rachid Ghezzal and Cheikh N’Doye of Senegal and Angers for the Marc-Vivien Foe Trophy.

Boufal was selected by a jury composed of French football journalists after each member selected three names from a list of 10 players previously drawn up by the RFI and FRANCE 24 sports departments.

Last year, the central midfielder had turned down Badou Ezzaki’s call-up to play against Sao Tome and Principe in the 2017 African Cup of Nations qualifiers on September 5th.

Boufal said that he refused to play for Morocco in order to focus on his club career with French side Lille OSC.