Beijing - The president of the People’s Republic of China, H.E. Xi Jinping, on Wednesday offered an official welcome ceremony for king Mohammed VI at the Great Hall of the People in Beijing. 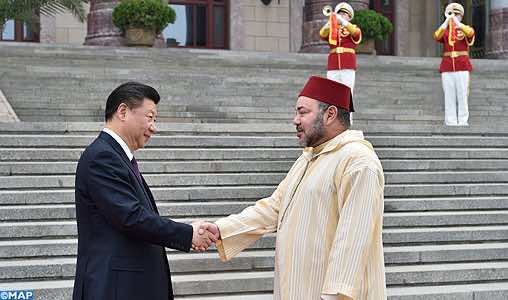 Beijing – The president of the People’s Republic of China, H.E. Xi Jinping, on Wednesday offered an official welcome ceremony for king Mohammed VI at the Great Hall of the People in Beijing.

The President of the People’s Republic of China was then greeted by members of the official delegation accompanying HM the King on his visit to China.

The King and Chinese President then reviewed a military detachment of the three armies (land, sea, air). One hundred students from the Chinese capital shouted in unison “Welcome to China!” while waving flowers as well as Chinese and Moroccan flags.

The two heads of state then watched a military parade performed by the three armies, which closed the welcome ceremony.