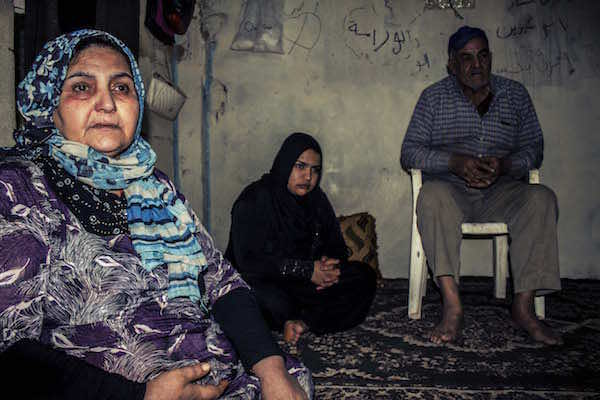 Almost every one of the elderly refugees in HelpAge’s report Older voices in humanitarian crises said they had not been consulted about their needs, more than two thirds said they did not have enough information about the humanitarian assistance available to them, almost half said health services did not provide care for their age-related conditions and close to half said they felt anxious, hopeless or depressed most or all of the time.

The survey conducted at the end of last year offered elderly people the space to share their hopes and concerns and talk about the challenges affecting their daily lives in humanitarian crises.

Warda, an 85-year-old Syrian woman living in Lebanon, spoke for many when she said: “I know that humanitarian aid might be helping, but only for those who can go and get it. How am I supposed to get this help if I can’t even leave the room?”

Oboch, 86, living in a refugee camp in Juba, South Sudan said, “We’re always being filmed and photographed but nothing changes. We know humanitarian organisations can’t leave people to die of hunger but why is there not enough food?”

A shocking 95 percent of elderly people spoken to in Lebanon, 93 per cent in South Sudan and 66 per cent in Ukraine said that no-one other than HelpAge had consulted them about their needs despite the fact that many elderly people are reliant on humanitarian assistance.

Anatoly, 89, said humanitarian aid was a lifeline during the blockade in eastern Ukraine. “For nine months, we had no pension and many people simply starved. I don’t know how we would have survived without aid.”

Salwa, 60, a Syrian refugee living in Lebanon said, “We’re only able to live because of the blue card the UNHCR gave us. We used to receive US$120 per month but now we get US$40. It’s barely enough and medical help is impossible.

“My husband manages to provide us with US$4-5 a day from selling the cans he collects and my oldest daughter cleans stairs in the neighbourhood to make some money.”

An 86-year-old Syrian refugee in Lebanon said: “I’m afraid all the time. I don’t sleep well. I get headaches and tremors. I used to be able to do everything by myself. I could clean the house, take out the garbage, do some repair work and now I can’t. Now I’m older it feels as though I’m a burden and people aren’t interested in me.”

An 85–year-old woman in South Sudan put it clearly: “No-one talks to me to find out what I’m going through.”

The first-ever World Humanitarian Summit this May provides a chance to lay the foundations for a reformed humanitarian system – one that puts people at the centre of disaster response, builds resilience to crises and really does ensure that we ”leave no-one behind”.

Leading humanitarian agencies have drawn up an Inclusion Charter www.inclusioncharter.org setting out the pressing commitments needed to ensure humanitarian assistance reaches the most vulnerable people.

“To address the neglect faced by elderly people in conflicts and disasters, their opinions must be heard and changes made in the humanitarian system,” said Frances Stevenson, head of the humanitarian team at HelpAge International.

The commitments outlined in the Charter provide governments, donors and humanitarians agencies with a set of five key actions to ensure humanitarian assistance reaches the most vulnerable people in emergencies.

To sign up to the Charter go to: www.inclusioncharter.org