Beijing - King Mohammed VI chaired, on Thursday in Beijing, the signing ceremony of several public/private partnership agreements, as part of the strategic partnership between the Kingdom of Morocco and the People's Republic of China. 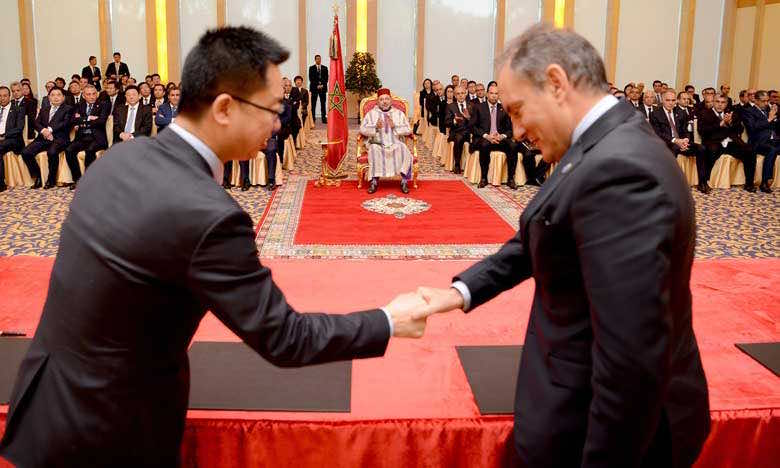 Beijing – King Mohammed VI chaired, on Thursday in Beijing, the signing ceremony of several public/private partnership agreements, as part of the strategic partnership between the Kingdom of Morocco and the People’s Republic of China.

The first agreement is a memorandum of understanding (MoU) to set up an industrial and residential park in Morocco between the Kingdom of Morocco and Chinese group HAITE. The MoU concerns the construction of logistical and residential zones in the region of Tangiers.

The second is a cooperation agreement on the sector of investment and finance between the government of Morocco and the Industrial and Commercial Bank of China Limited.

The third is a MoU on the transfer of North-South Waters between the government of Morocco and China Harbour Engineering Company ltd.

The fourth is a draft agreement between Morocco’s office for electricity and drinking water (ONEE) and China’s SEPCO III Electric Power Construction. It touches on conducting studies to conclude a contract on the extension and maintenance of Jerada power plant.

The fifth is a partnership agreement between the Moroccan Tourism office and China International Travel Service (CITS).

The sixth is a partnership agreement between YANGTSE, the “Société d’Investissement Energétique” (SIE), Marita Group and the “Banque Centrale Populaire” for purchasing and building a unit for manufacturing electric buses (ultra-light) worth 1.2 billion dirhams.

The seventh agreement concerns a partnership between Linuo Ritter, SIE, Cap Holding and Attijariwafa Bank for the creation of an industrial production unity for solar water-heaters in Morocco (worth around 96 mln dirhams).

The eight document is a partnership agreement between Hareon Solar, SIE, Jet Contractor and Attijariwafa Bank for the development of a production unit for photovoltaic cells (1.1 billion MAD on four stages).

The ninth is a MoU between China Africa Development Fund (CAD Fund) and Attijariwafa Bank. It seeks to back up African enterprises by completing the loan offer through a contribution in capitals and efficient governance, in addition to opening new prospects for Moroccan-Chinese investment opportunities in Africa.

The tenth is a MoU between Haite Group, Morocco-China International and BMCE Bank of Africa. It touches on the setting up in Morocco of a Chinese-Moroccan industrial park, and a Chinese-Moroccan one-billion dollars investment fund targeting the sectors of aeronautics, finances, industrial parks and infrastructure, the launching of a fund management company and reinforcing partnership in the fields of life insurance in China, aircraft leasing, as well as a technical partnership to launch a bank on new technologies in China.

The eleventh is a MoU between BMCE Bank of Africa and China Africa Development Fund (CAD Fund). It concerns the funding of development projects in key-sectors in Africa, investment in markets of public and private debt in Africa, and partnership as part of the ‘223’ Club, an initiative created by the BMCE Bank Group of Africa under the COP22 slated this year in Marrakech.

The twelfth is an agreement on financing the construction of a cement plant in Morocco.

The thirteenth is a MoU for the development of an industrial and logistical hub for manufacturing spare parts for railway, car and aeronautics industries between the Sichuan Huatie hi-tech Construction Engineering co. ltd, the “Société Nationale de Transport et de la Logistique (SNTL)” and the ATTIJARIWAFA BANK.

The fourteenth document is a MoU for the development of logistical zones in Africa between China Harbour engineering company LTD, the SNTL and Attijariwafa Bank. It seeks to combine the Moroccan and Chinese know-how in engineering and infrastructure and benefit from the Moroccan expertize in logistical platforms development.

The fifteenth is a MoU for China-Africa cross-border E-Trade between CLEVY CHINA, the SNTL and Attijariwafa Bank. It is meant to develop a E-market platform for Chinese products sent to Africa by using Morocco as a distribution hub and a gateway to Africa.

The signing ceremony was attended by the official delegation accompanying the King in his official visit to China, heads of public and semi-public bodies and several Moroccan and Chinese economic operators.