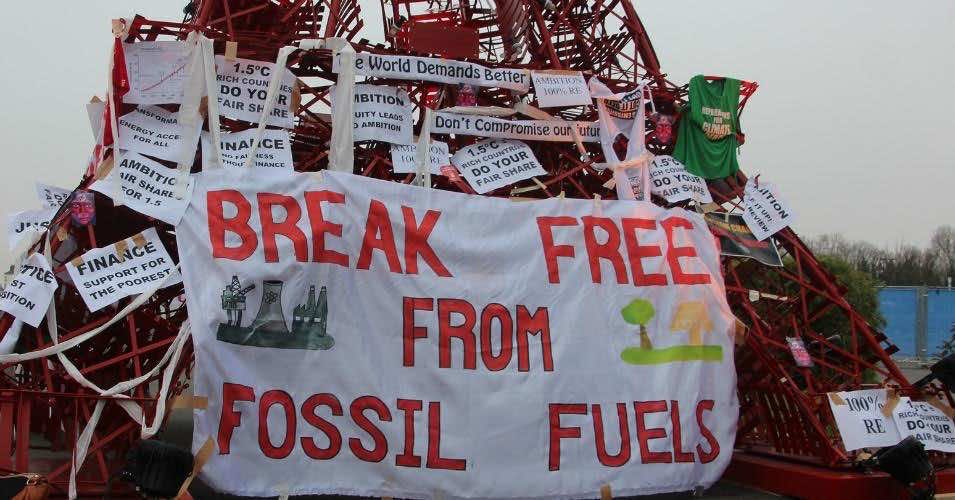 Rabat – In the context of the global fight against the fossil fuel industry, Morocco should not pretend that it does not have a role in the ongoing campaign.

As it demonstrated in the face of the “Arab Spring,” the country is well poised to play its own effective and peaceful part in the ongoing collective effort against oil barons and their malicious practices. Through engaging civil society organizations, raising awareness, and educating its youth, the host of the COP22 can carry its share of the burden in mitigating climate change and preserving democracies from the threats stemming from oil corporations’ dirty cash. Ahead of the November 2016 UN climate change conference in Marrakech, Moroccans need to examine the examples of the Break Free campaigns currently happening around the world and determine their own Moroccan way to “break free.”

The Break Free campaign is a protest movement which aims at exerting pressure on fossil fuel corporations and is taking place in many locations around the globe. In South Africa, for instance, protests broke out in the northeast of the country against the coal mining industry operating in the region. The protests mobilized civil society, coal mining impacted communities, farmers, and NGOs against the climate crises and corruption plaguing the coal mining sector there. The country has in fact seen a massive corruption scandal which involved senior government officials.

The biggest oil producer in Africa, Nigeria, one of numerous examples of countries suffering from oil-related corruption cases, is witnessing a wave of protest actions. Nigeria’s Break Free from fossil fuel campaign began on May 10 in Oloibiri, which houses the nation’s first oil well, and ended on May 12 in Ogoni to denounce the polluting actions, devastation, and poverty which oil extractors leave behind once oil reserves are depleted.

In the United States, Break Free actions are taking place in the form of “peaceful civil disobedience” nationwide. This includes rallies and extends for four full days (from May 12-15). In New Zealand, Australia, and the Philippines, similar demonstrations are occuring as well. The level and scale of the Break Free campaign should be considered by Morocco ahead of its edition of COP.

Given the very tense context in the Middle East and North Africa, calls to protest often are taken for an incitation for unrest of some sort. However, the Moroccan “exception” has always proven to win in times of crises, and climate change presents many of the same political and socio-economic challenges we have faced previously. What prevents our country from taking serious action is the clear lack of education and absence of civil society engagement in the areas of environment and climate change. Additionally, the media, through its various outlets, is still sparing little air time to educational programs to raise awareness about the matter at hand.

Also notable is the complete absence of social media channels targeting youth, the presence of whom is vital. Some skeptics of such campaigns claim that in non-oil producing countries like Morocco,fossil fuel industries do not directly operate in our country. Yet if you simply think about the investments Morocco solicits every year, you will realize that many of them have the potential of originating from fossil fuel industry funding – likely fraudulent. Authorities should encourage responsible, peaceful activities and campaigns. Morocco has, time and again, proven its ability to be a leader in peaceful change in the region and the world, and if these small challenges can be overcome, many emerging countries will look to Morocco as an example.

Though inspired by those already ongoing, our actions should be compatible with our society, mindset, and values. The Moroccan civil society should be involved accordingly in “our own” Break Free campaign. As much as planning for summer camps and other activities matters, organizing events aiming at inculcating environmental and climate change basics and, especially, incorporating them into the summer plans and fun activities will draw wider attention from young citizens, facillitating the process of engaging and mobilizing.

Furthermore, by taking kids to some of the endagered beaches or mountainous areas, where camping is popular during the summer, civil society activists can educate their pupils by allowing them to experience the harm inflicted on their favorite summer retreats firsthand. Civil society leaders, in addition, should ensure that young members of their community be fully sensitized and ready to contribute to conducting “our own” Break Free action, to which we will assign a nickname in Darija (Moroccan Arabic) and inspire our regional neighbors. Even though we do not have coal mines to which to shut down roads, or oil companies to protest against publicly, what will set our Break Free campaign apart is our peaceful, aware, and engaged movement, and that will undoubtedly prove to the world our true commitment to the common cause.

Beyond the actual ominous threat the fossil fuel industry represents to our climate and environment, it also has the potential of undermining democracies by deploying all possible means, including corrupt and fraudulous activities in order to fulfill its ends.

The promising Break Free campaigns around the globe are the only way that those concerned about their democracies being harmed – the world is full of examples of corruption and money laundering related to giant oil operators and involving politicians as the recent Panama Papers clearly show – can counter this rising threat. Morocco should not further itself from the actions happening globally. The country has the potential to join the effort through molbilizing all the different components of its civil society groups, calling upon those accountable for destroying the climate and democracies to leave fossil fuels “in the ground where they belong!”