Rabat -Aicha Less, a Moroccan-British member of the Labour Party, was elected Councilor for the Church Street Ward in the City of Westminster on May 5. 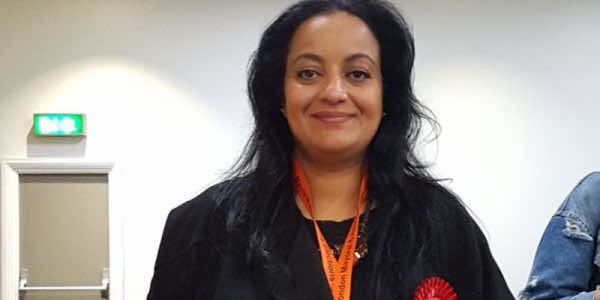 By
Larbi Arbaoui
-
Larbi is a freelance writer and assistant editor at Morocco World News.
May 13, 2016
Spread the love

Rabat –Aicha Less, a Moroccan-British member of the Labour Party, was elected Councilor for the Church Street Ward in the City of Westminster on May 5.

The Moroccan politician, who was born in Larache, a northern Moroccan city, and moved to London as a child in 1983, was elected Councilor in Church Street by-election on May 5, following the resignation of Vincenzo Rampulla.

Less won the five-way race with 2,174 votes. Her fellow Moroccan challenger Rachid Boufas, from the Conservative Party, obtained 512 votes, followed by Barr Alistair Graeme, of the Liberal Democrats, with 205, Jill Sarah De Quincey, from the UK Independence Party (UKIP), with 175 and Andreas Habeland, of the Pirate Party UK, with just 26 votes.

After nearly 20 years of experience working in local government, Less became the first Moroccan to land a seat in British local elections.

Less campaigned on her passion for the area and loyalty to the issues and causes of her community.

During her campaign, Less said, “I want to be the people’s advocate and work on their behalf, particularly in raising their concerns about problems with the futures plan for Church Street including the lack of consultation from the Council.”

The Moroccan politician gained the trust of the Westminster residents who voted for her, winning the election with 70 percent of the vote.

Her Labour colleagues have expressed their faith in her capacities and dedication to serving her community.

Ahead of the elections, Labour Group Leader Councilor Adam Hug said, “Westminster Labour group is delighted that local members have selected such a committed and passionate candidate for Church Street. Aicha will be a great voice for local residents if elected as the new councilor for Church Street on May 5th.”

The election of the Moroccan woman as Councilor for the Church Street Ward in Westminster comes only a few weeks after Sadiq Khan, also from the Labour Party, was elected London’s first Muslim mayor.