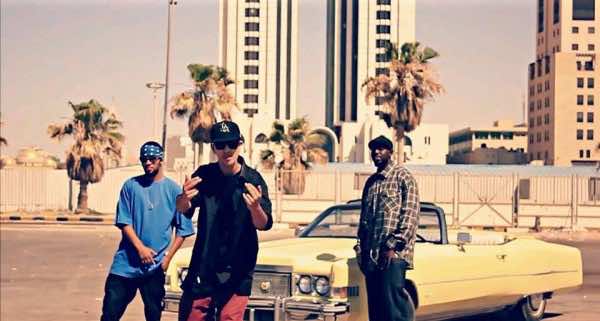 As a non-Moroccan cultural form, rap music has received much criticism by large numbers of Moroccans. Yet, a significant number of young people support it. As a result, two major groups have formed in Moroccan society: rap rejecters and rap adherents, who both deploy opposing arguments to support their opinions. The current controversy over rap in Morocco stems from the apparent Western origins of this genre of music. In Morocco, many reject rap due to these origins while many others accept it because of cultural diversity and cultural acculturation.

In an attempt to understand the richness and diversity of Moroccan music, Richard Nidel writes in his book, World Music: The Basics, that:

“Historically, along with Egypt and West Africa, Morocco is one of the three points of a cultural triangle where various ethnic groups have traded in the region throughout the past millennium. Goods and ideas have always flowed through this triangle from guinea and Timbuktu to Fez and Cairo (…) the exchanges have always included music” (Nidel, 14).

In Morocco, the music scene is diverse and rich. This is due to the fact that Morocco is a country of cultural diversity par excellence. Moroccan culture derives from two main cultures, the Amazigh and the Arabs. These two cultures have co-existed since the advent of Islam in the 7th Century. Both Arab and Amazigh cultures vary from one area to another. This can be seen through the different traditions and customs among Arab and Amazigh communities.

Cultural diversity is manifest throughout the Moroccan soundscape, which is also determined by geography. In a similar context, Richard Nidel states that, “The music of Morocco ranges and differs according to the various areas of the country” (Nidel, 15). Jebli Music (al-Aita), Reggada, Hassani music, Chaabi (folk music), Berber music, to name a few, are different, deeply-rooted, and regional types of music.

However, not all Moroccan forms of music are purely Moroccan productions. That is, there are some which do not originate from Morocco and which are hybrid. Gnawa and classical music are, despite some reservations, not Moroccan but have been “Moroccanized.” Now that these two forms of music have become part of the Moroccan soundscape, few pay attention to their non-Moroccan origins.

Gnawa music, which is already becoming part of Moroccan folklore, was brought to Morocco long ago through contact between Moroccans and West Africans, who have always had common political and economic interests. This contact resulted in cultural acculturation between Moroccans and West Africans. The term “cultural acculturation,” which has been over-used in Moroccan mainstream media to justify the very existence of Gnawa music in Morocco, is misleading if removed from its historical context. To understand how Gnawa came to Morocco, we must understand the nature of the economic activities (trade) that connected Morocco to West Africa.

Historically, slavery was one of the backbones of the economic relationship between Moroccans and West Africans, and played an active role in Morocco during the period between the 11th Century and 17th Century. Slavery was supported and encouraged by the Sultans, who used slaves for their own purposes. During the ruling periods of the Almoravids, the Almohads, and the Sa’dis, huge numbers of black slaves were brought to Morocco for military purposes. Consequently, a great deal of West African traditions came to exist in Morocco. However, slavery is not the only reason which explains the existence of Gnawa music in Morocco; the migration of sub-Saharan peoples to North Africa also played a major role in bringing West African traditions to the Maghreb in general, and to Morocco in particular.

Modern music (usually called classical music in Morocco) reached its peak during the second half of the 20th Century, and is another important component of the music scene in Morocco. Unlike Gnawa music, which is largely regional music, modern music is a national genre that is equally appreciated among different regions in Morocco and is the most prestigious, though it does not originate from Morocco.

By the second half of the 20th Century, the Arab world, specifically Egypt and Lebanon, saw a musical flourishing that spread and was highly appreciated among people from different parts of the Arab world. Singers like Oum Kalthoum, Farid El Atrach, Mohamed Abdel Ouahab, Abdel Halim Hafez and Fayrouz, among many others, were, and still are, very influential and well known across the Arab world. In Morocco, some beginners later became famous singers, and had a tendency to imitate the previously mentioned singers. Still, the way these musicians and singers organize themselves on stage is the most important element to reveal the non-Moroccan origin of modern music.

This debate over rap music reveals two different perspectives. Like many other Western cultural elements, rap is rejected by a large number of Moroccan people who consider it harmful to Moroccan culture. Another significant number of Moroccans, especially younger generations, accept and adopt rap music because of reasons that will be further addressed. Taking into account that rap is a product of Western culture, the debate over Moroccan rap should be understood within the dichotomy of the Self and the Other (East and West). This debate is actually a debate over whether to accept or reject Western cultural products in Moroccan society. Both rap rejecters and adherents use different arguments to support their viewpoints.

First, some rap rejecters argue that this kind of music can by no means be considered an art because of its lack of formal training. In other words, this music needs, according to them, to be based on formal education. This point actually overlooks the fact that rap is the music of the oppressed. That is, if rappers were trained in formal institutions of music then rules would prevent them from expressing and conveying their true social, political, and economic difficulties. In addition, formal training would affect the audience’s ability to decode the messages it conveys.

The idea of formalizing rap music endangers its very rebellious and expressive nature. In the context of formalizing and promoting rap music, the following question imposes itself: why should rap music be formalized since large numbers of people already like and support it? This question highlights a central point in cultural diversity which lies in respect for the choices of others. In other words, if one does not like rap, it does not mean that rap is bad.

Another interesting argument that is used by rap rejecters is that the using certain rap accessories and clothes is insignificant and irrelevant in the Moroccan context. This point is apparently the most serious one within the discourse of people who oppose rap, for it sheds light on the degree of awareness among rappers of supposedly useless aspects of Hip Hop culture, especially in the Arab World. One example is the earrings that some rappers wear to convey “sexuality.” Yet, the majority of Moroccan rappers show a high degree of awareness of such negative aspects of Hip Hop culture.

The deployment of rude words is considered another weakness of rap music in Morocco. Some Moroccan rappers like Don Bigg employ rude and societally-rejected words in their songs. However, some argue that these rude words are used for specific purposes which lie in the necessity of a direct description of certain social and political phenomena.

Hicham Abkari, the founder of the Moroccan Underground Federation, argues that the problem is not with the use of rude words, but rather with the use of Moroccan Arabic. This is because, according to him, nobody complains about the many Western songs that include rude words which are almost daily broadcasted on Moroccan TVs and radio stations. But again, many Moroccan rappers and rap bands, namely Fnayer, Casa Crew, and Muslim, do not accept the use of rude and impolite words in their songs.

The rejection of rap on the grounds of its Western origins remains the most frequently-used argument of people who oppose rap music. This is actually a weak argument, for rap is to a large extent of African origins. One should actually ask the following questions: What if rap were of pure Western origins? What is wrong with Western culture itself? Are there no other Western cultural elements in our culture? Does being an Arab mean rejecting anything that comes from the West? These questions actually reveal an essentialist and self-centered view which refuses and rejects any connection or interaction with the “Other.” This view is held by many people, including intellectuals, and it is very weak especially when it comes to cultural issues. Such a claim presupposes cultural purity, which is another useless term. Khalid Amine writes in a different context that, “Purity is a useless quest, for culture is a cross-road of hybrid codes that are renewed time and again” (Amine, 95).

In Morocco, as well as in the rest of the world, it is impossible to talk about cultural purity, for the Moroccan culture is a result of the contact between different cultures and civilizations that have existed in Morocco throughout history. The Amazigh, Roman, and Arab cultures provide an interesting example of the various cultures that have existed in Morocco and significantly contribute to the making of current Moroccan traditions.

Conversely, rap adherents and supporters in Morocco (namely well-known rappers) argue that they are aware of the previously mentioned negative and irrelevant aspects of Hip Hop culture which, according to them, should not be adopted by rappers in Morocco. Rappers like Muslim, Master Flow, and others are explicitly against the use of earrings and exaggerated clothing styles. This is simply because rap should be adjusted to the Moroccan norms and values.

Moreover, Moroccan rap is said to be a “counter-culture” which reacts against “the mainstream culture” that is conveyed through mass media in the first place. Rap is a means through which people convey their true social, economic, and political difficulties which are, most of the time, misrepresented by national mass media.

To conclude, the controversy over rap in Morocco oscillates between two opposing points-of-view. The first is an essentialist standpoint which rejects anything that comes from the West without providing any convincing justification, while the second is a moderate one which tolerates cultural exchange between the Self and the Other regardless of ethnicity, religion, and race. The essentialist standpoint, which is adopted by people from different walks of life, reflects what the Moroccan thinker Abdlkbir Khatibi terms the “Wild Identity,” which stands for a total rejection and exclusion of the Other’s culture. In this context, Abdellah Laroui writes that, “The disavowal of Western culture cannot in itself constitute a culture, and the delirious roaming around the lost self shall never stir it up from dust” (Amine, 129).