Rabat - Masquerading in Islamic clothes, four Femen activists surprised the scholar in Islamic affairs Tariq Ramadan with their naked breasts during a lecture he gave in Le Bourget, France. 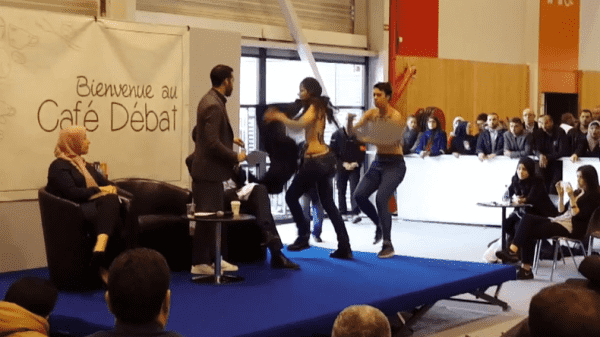 Rabat – Masquerading in Islamic clothes, four Femen activists surprised the scholar in Islamic affairs Tariq Ramadan with their naked breasts during a lecture he gave in Le Bourget, France.

The video of the incident shared by Femen Movement has gone viral on social media. It shows the activists disguised in Islamic clothes ascending to the symposium stage and then stripping their clothes in front of the scholar.

FEMEN, as the movement defines itself, is an “international women’s movement of brave topless female activists painted with the slogans and crowned with flowers.” They protest by disrupting official events with their naked attack against “male economic, cultural and ideological occupation.”

The protesters used the poster “Allah is not politician.”

“FEMEN protest against the visit of fundamentalist preachers at a rally to politicize Muslims in France under the aegis of the Muslim Brotherhood!” the movement said on its webiste.

“FEMEN claims that political Islam is totalitarianism, and a face of fascism,” it added.

This is not the first time Femen activists attacks a Muslim scholar, interrupt an event where Islam is being discussed, or even engage in provocative actions.

The move caused a wave of protests in Rabat, with thousands of Moroccans protesting in front of the French embassy in Rabat denouncing the group’s “attack on Morocco’s sacred values.”