Rabat - Pictures and videos of Bollywood superstars Ranbir Kapoor and Katrina Kaif dancing to the song of an upcoming film have gone viral on social media recently. 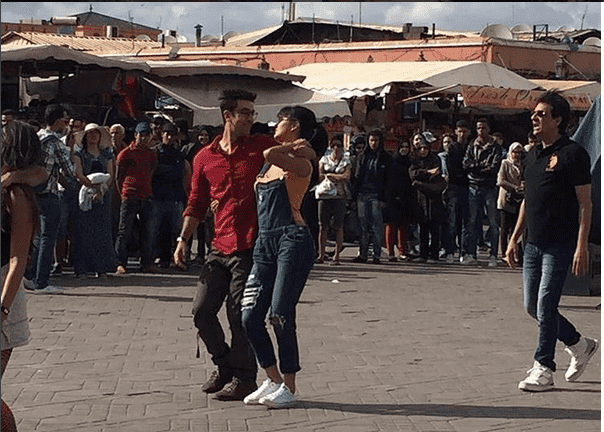 Rabat – Pictures and videos of Bollywood superstars Ranbir Kapoor and Katrina Kaif dancing to the song of an upcoming film have gone viral on social media recently.

Fans have shared widely on Instagram a number of photos and videos taken on location at the movie shoots of Indian actors Ranbir Kapoor and Katrina Kaif in Morocco for Anurag Basu’s film “Jagga Jasoos.”

A video shared on Saturday on Twitter shows the duo performing quirky steps as part of a song sequence in what looks like a souk, an open market where street vendors offer goods for sale.

Kapoor, one of the most popular celebrities and highest-paid actors in India, dances together with Kaif, a British film actress and model, while Moroccans are busy shopping in the souk, probably in Marrakech.

Yet another pic! #RanbirKapoor and #KatrinaKaif on the sets of #JaggaJasoos.

Some reports claim that the ex-lovers are going through a rough time after their six-year long relationship went sour.  The couple, who co-star in the film, allegedly “refused to kiss” during one scene.  The photos shared online, however, show the couple apparently enjoying their time together in Morocco.

Jagga Jasoos is an upcoming Indian comedy-drama film directed by Anurag Basu, and produced by Basu and Ranbir Kapoor.  The film is expected to open in Indian cinemas on June 3.