Rabat - Thousands of people took part in the colorful parade on the streets of the southern Moroccan city of Tan-Tan as part of the 12th annual Tan-Tan Moussem Festival, running from May 13 to 18. 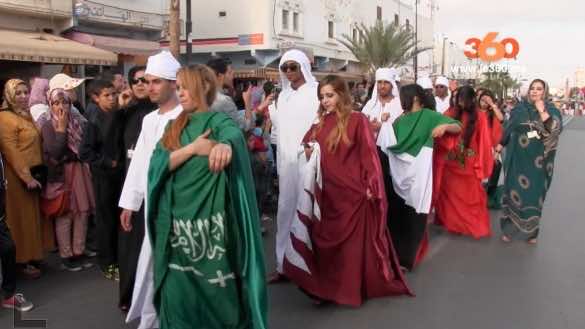 By
Larbi Arbaoui
-
Larbi is a freelance writer and assistant editor at Morocco World News.
May 16, 2016
Spread the love

Rabat – Thousands of people took part in the colorful parade on the streets of the southern Moroccan city of Tan-Tan as part of the 12th annual Tan-Tan Moussem Festival, running from May 13 to 18.

The festival, which is recognized by UNESCO as a Masterpiece of the Oral and Intangible Heritage of Humanity, brought about a thousand people, representing various nomadic tribes from the Moroccan Sahara and other Arab and Gulf countries.

The festival celebrates the Bedouin culture and the perspicacity of the locals through the preservation of the various dimensions of their daily life.

As is the fact every year, the citizens and local associations have shown their commitment to the success of the Tan-Tan Moussem Festival. All the participants demonstrated their attachment to the integrity of the kingdom through various artistic forms including paintings, patriotic songs by students and local bands, fashion exhibitions and demonstrations of martial arts.

The parade also highlighted traditional clothes, music and customs of the Saharawi marriage, music and all the components and aspects of this rich culture were beautifully demonstrated.

The participants in the festival showcased a diverse range of performances specific to their tribes including popular songs, heritage games, poetry evenings, and performances featuring horses and camels.

Some Gulf countries contributed in the enrichment of the festival that was historically considered an annual gathering of the Amazigh and Hassani tribes to “promote local traditions and provide a place for exchange, meeting and celebrations.”

“An active Emirati participation in the activities of the Tan-Tan Moussem Festival is quite important as it boosts cultural dialogue and reinforces exchange between the main players in the field of authentic Bedouin heritage and culture,” said Faris Khalaf Al Mazrouei, chairman of the Cultural Programs and Heritage Festivals Committee in Abu Dhabi.

“This participation serves and strengthens the distinguished cultural ties between the UAE and the brotherly Kingdom of Morocco,” he added.

In September 2004, the Tan-Tan Cultural Festival was inducted into the UNESCO List of Intangible Cultural Heritage to ensure its safeguard and maintain its annual organization.