Taroudante - A group of around 70 people led by Louie Scheiner of New York who travelled to Morocco over the past week, according to Yeshiva World News, an Orthodox Jewish online news publication. 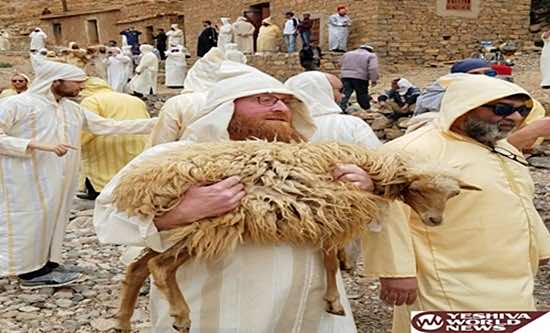 By
Larbi Arbaoui
-
Larbi is a freelance writer and assistant editor at Morocco World News.
May 17, 2016
Spread the love

Taroudante – A group of around 70 people led by Louie Scheiner of New York who travelled to Morocco over the past week, according to Yeshiva World News, an Orthodox Jewish online news publication.

The same source posted photos and videos of a group of Jews featuring their visit to what they call “the kever of one of the sons of Shlomo Hamelech in Morocco.”

The celebration took place apparently in the shrine of Sidi Bouissa Ossliman in the small village of Tagouroute, Taliouine, about 200 kilometers away from Agadir.

A participant was quoted by the Yeshiva World News as saying, “We walked where no Jew has walked before. This is the tomb of one of the sons of King Solomon.”

The man said that they had flown from Rabat to Ouarzazate, and then driven in jeeps for hours through the most amazing dust roads mountains and valleys for miles and miles to reach the village, home of the kever (shrine) of the son of Shlomo Hamelech.

He added that they had met with local people from the community with whom they sang and danced together after exchanging prayers before they left.

The group, who were scheduled to return to NY on Tuesday, were also seen in a video posted on YouTube singing and dancing their traditional Talmudic dance at Casablanca Mohammed VI airport as an expression of their gratitude for Morocco.

The video went viral on social media networks with comments hailing the tolerance of Morocco’s security officers at the airport.

Statistics say that while around 250,000 Jews lived in Morocco in the 1940s, currently, approximately 2,500 Jews live in Morocco after their massive migration to Israel following Operation Yachin between 1961 and 1964.