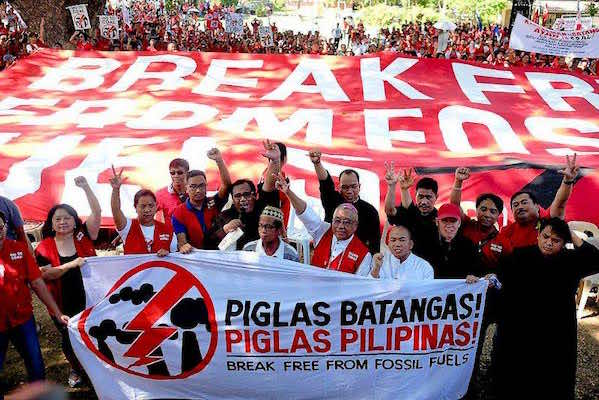 Rabat – We all know fossil fuels are an imminent threat to the future of humanity. We all know how to eliminate them from our daily lives and strive for climate stability, right?

Well, the results of a recent survey show that despite the fact that most people believe in climate change and see it as a threat, they actually feel distanced from the problem and its solutions. The BreakFree actions of May 3-15, 2016, highlighted this discrepancy. The movement’s effects are still reverberating around the world, and there are still endless ways to get involved and make a lasting difference.

Despite being widely regarded as the largest civil disobedience protests in the history of the climate change movement, 88 percent of survey respondents reported having never heard of BreakFree, highlighting insufficient media coverage and strong sway of fossil fuel producers in the mainstream media, where viewers regularly see five times more fossil fuel company advertisements than climate change news coverage. Although most respondents have not heard of the campaign, it succeeded in derailing the operations of many major fossil fuel producers: shutting down a coal mine in South Africa, blocking railways for oil trains in the United States, and disrupting a coal ash disposal site in Turkey.

The survey, randomly polling more 35 respondents from four continents, revealed startling information about how people around the world, in countries of various levels of development, feel detached from climate change. When asked “Are you negatively impacted by fossil fuel consumption on a daily basis?,” an alarming 65 percent responded “No.” Most people feel that fossil fuels are here to stay. Sixty-eight percent of respondents believe that global elimination of fossil fuels will happen either after 2050 or never. Thirty-two percent are more optimistic, stating that fossil fuels will be eradicated between 2030 and 2050. No one believes it is possible to completely move to renewables before 2030, despite a 2011 study that showed that 100 percent renewable energy could be possible globally by 2030 “if there is the political will to strive for this goal.”

Fortunately, almost all of the respondents have ideas about what they can do on a daily basis to reduce their carbon footprint. However, nearly all believe that reducing fossil fuel consumption and greenhouse gas emissions relates exclusively to their transportation usage. For example, no one mentions eating habits, perhaps the easiest way to make a huge difference. Nearly 20 percent of global greenhouse emissions (nine percent of global CO2, 65 percent nitrous oxide and 35 percent of methane) emanate from the livestock industry.

By switching to a healthy, meat-free diet, we can cut more nitrous oxide and methane emissions than by getting rid of our cars! When asked “What is the most effective way to eliminate climate change?,” more than ninety percent of the sample stated renewable energy breakthroughs would be most practical. Only one respondent mentions installing solar panels on their home, a proven way to greatly diminish CO2 emissions. However, the respondent states that s/he would “love to put solar panels on [her/his] roof, but it’s cost prohibitive.” This is another example of a myth about renewable energy propagated by fossil fuel companies.

Just because official BreakFree actions concluded, events are still taking place daily around the world. You can easily get involved in a local environmental awareness group – regardless of where you live. Civil society must continue to urge governments to make climate change prevention a priority.

When it comes to responsibility for ending climate change, the overwhelming majority of those surveyed think that developed states should be most accountable. Only a minority of respondents believe individual actions can reduce climate change too. We must all do our part. Governments will not take action until citizens push them to do so, and we must all first make individual changes to be able to take a stance. Whether it’s driving less, eating smarter, using less electricity, or joining an awareness campaign, we all must play our part each day!