Rabat - Moroccan Zakia Belkhiri’s selfies in front of an anti-Islam protest of a far-right nationalist group in Belgium has gone viral with tens of thousands of likes and shares across social media. 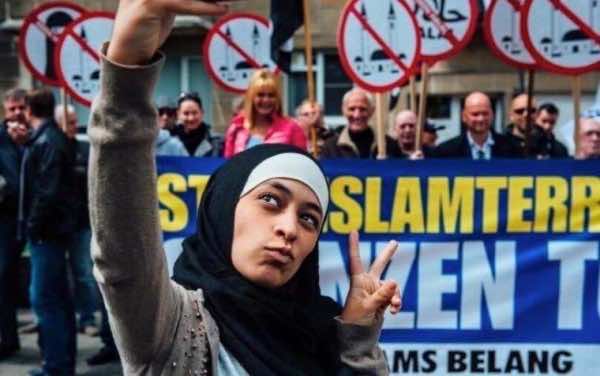 By
Larbi Arbaoui
-
Larbi is a freelance writer and assistant editor at Morocco World News.
May 22, 2016
Spread the love

Rabat – Moroccan Zakia Belkhiri’s selfies in front of an anti-Islam protest of a far-right nationalist group in Belgium has gone viral with tens of thousands of likes and shares across social media.

While the protestors chanted their anti-Islam slogans, a young girl originally from Morocco posed in front of the group to take selfies.

The Moroccan young woman managed to successfully steal the spotlight, with some of the anti-Islam protestors reportedly entertained by the way she was taking selfies. Photographer Jurgen Augusteyns captured photos of her doing so.

When Belkhiri left the annual Muslim Expo, she started to take photos of herself under signs that read “no headscarves”, “no mosques”, and “stop Islam”.

She told BBC Trending she took the photos “to show that things can be different. And that we can live together, not next to each other but with each other.”

She said her selfies had not been a form of counter-protest, and she just wanted to “share joy and peace”.

The Moroccan activist was immediately labeled as a “herald of peace” – a true hero “fighting against islamophobia with humor, love and selfies.” She was put on a pedestal as an “icon for tolerance”, and the selfie considered as the perfect cure against discrimination.

Some sources claim that Bilkhiri went to stay with family in Morocco until “the storm has blown over.”

According to BBC, the recent bombings at the Brussels airport resulted in an increase in support for far-right groups.