Rabat - Optique Chaab, an optometry center in Agadir, Morocco, has used a photo of Prince Daniel of Sweden, Duke of Västergötland, and the husband of Crown Princess Victoria of Sweden, in an advertisement to promote their glasses. 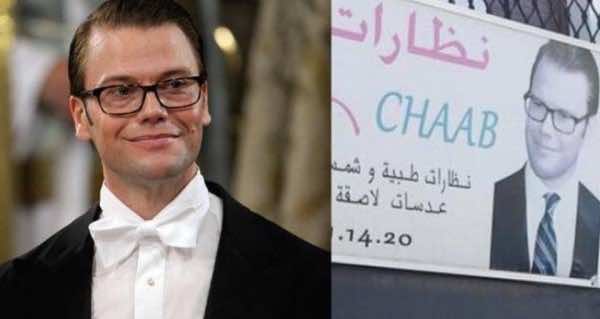 By
Larbi Arbaoui
-
Larbi is a freelance writer and assistant editor at Morocco World News.
May 24, 2016
Spread the love

Rabat – Optique Chaab, an optometry center in Agadir, Morocco, has used a photo of Prince Daniel of Sweden, Duke of Västergötland, and the husband of Crown Princess Victoria of Sweden, in an advertisement to promote their glasses.

The center – apparently unaware who the man is – put Prince Daniel’s photo on a billboard on a main street in Agadir.

According to The Royal Forums, Johanna Nordin of Stockholm was the first to draw attention to the advertisement. When Nordin saw the prince’s photo on the billboard, she was greatly surprised. She ruled out the idea that the prince had sold his photo for advertising. She then took a photo of the advertisement and posted it to Instagram, tagging the royal family’s account and jokingly asked if the prince was allowed to advertise that way.

The royal family of Sweden replied to Johana on Instagram, denying knowledge of the advertisement.

Margareta Thorgren, Director of Information and the Press Department at the Royal Court, said that “they have counselors that handle such things when they occur.” Their first concern, however, is if the image is truly of the prince.

The same source said, “It’s not the first time Prince Daniel has been used in advertising abroad. Last fall, he and Crown Princess Victoria appeared on a large advertising banner in Canton, China.” The court then contacted the advertiser and the banner was removed.

Thorgren didn’t mention if Optique Chaab had been contacted, sued, or sanctioned for the use of this photo without their consent.