Connecticut - Morocco has recently made significant strides in inviting foreign investment to boost tourism but it is also leaving a tasteful footprint in the culinary art internationally.

Connecticut – Morocco has recently made significant strides in inviting foreign investment to boost tourism but it is also leaving a tasteful footprint in the culinary art internationally.

Moroccan chefs are achieving high recognitions for the best savory and sweet creations. The country recently won the prize for the best “main course” at the International Culinary Competition in Spain. The famous Lamb Tagine with prunes and almonds, always a favorite. The sweet and savory combination in this dish brings the world into a silky, buttery pause where all your senses gather around the addicting aroma of freshly picked saffron. You’d never want to press play again.

As a result, big productions such as Master Chef have decided to set up shop in Marrakesh, the culinary heart of Morocco. It is but an obvious choice, Marrakesh is a whimsical culinary hub of snake charmers, mounts of divine marinated olives, decadent lamb head invitingly smiling at you to eat it, and my all-time favorite Lamb Tanjia. A simple but intricate dish carefully seasoned in a clay jar and baked underground for two days. My soul is currently teleporting to Marrakesh as I describe it. 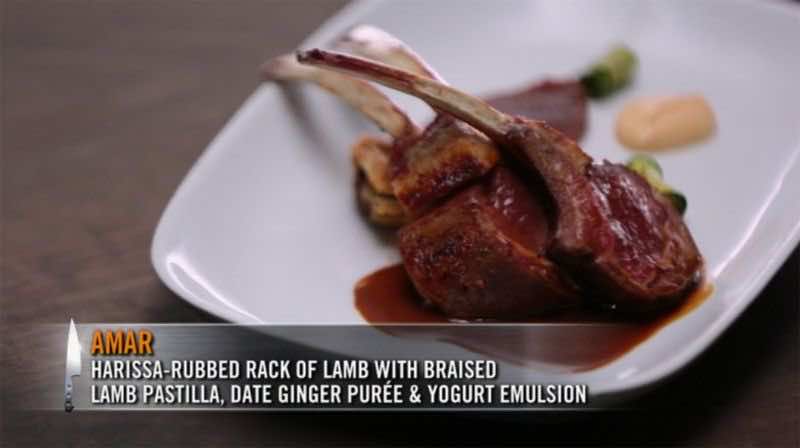 A Moroccan Kick to Your Taste Buds

Similarly, across the Atlantic, American chefs are venturing off and using uniquely Moroccan spices such as “Rass El Hanout,” where even “Moul Hanout” doesn’t know what’s in it. I was pleasantly surprised while watching the finale of “Top Chef,” where chef Amar Santana bravely reenacts the traditional Bastilla with a Dominican twist. The Dominican-American chef contestant whose roots dwell in the beautiful island of Dominican Republic, has fallen in love with the Moroccan flair and its cuisine. He was introduced to the culture, the food and people thanks to his friend and business partner, Ahmed Labbate, a seasoned restauranteur whose experience in hospitality stems from working for the most prestigious and luxurious hotels in Morocco and Germany. He forged his way into the highly competitive American culinary scene, bringing a unique identity, worldly passion and unprecedented experience.

Also part of the team, Moroccan chef Ghali Benhima. Chef Ghali brings Casablanca flair to Orange county, California in the fashionable city manner it is done a la Casablancaise. Together with Chef Amar, they promise an unforgettable culinary experience that takes your soul from the Caribbean to the exquisite scent of bubbling goat meat tagine in the hills of Agadir. The three enjoy making loyal patrons happy at two very busy Orange County restaurants: Vaca and Broadway by Amar Santana.

Another renowned Moroccan chef gracing Americans with Moroccan taste is Chef Mourad Lahlou, owner of Aziza in San Francisco. A native of Marrakesh, he traveled to the U.S. to study Economics and fell in love with cooking while feeling homesick as an international student. A Master’s degree earned, and his love of food only grew bigger. His dream was to revolutionize the Moroccan Cuisine.

He opened Aziza to introduce innovation to culinary traditions ancient in nature. The San Francisco chronicle awarded Chef Mourad 3 stars and was named a StartChefs Rising Star. Big networks quickly noticed his talent and casted him in prime time shows as a culinary expert and judge, shows like Top Chef, Iron Chef and his own show on the PBS channel. Today, Chef Mourad has earned the respect of world renowned culinary experts. He opened his second restaurant named Mourad, earning great reviews from critics and foodie fans alike.

It is safe to say that anytime you pair something with the taste of Morocco it is bound for success. Americans have clearly fallen in love with the Moroccan flair, from its sense awakening spices to its dreamy mosaic, Morocco constantly takes first place in making memorable, out of this world experiences.