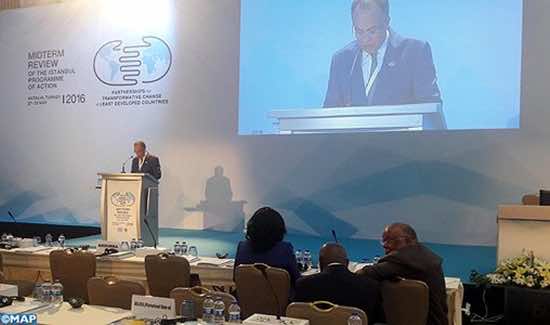 Morocco’s commitment to this kind of partnership is reflected by the various tours of King Mohammed VI in Africa, particularly in LDCs, during which the Sovereign kicked off multiple projects, and chaired the signing of several agreements, Abbou said at the Midterm Review conference for the Istanbul Programme of Action for the Least Developed Countries.

In addition to its actions in terms of economic, technical, social and cultural development, Morocco, aware that human capital should be central to any development strategy, has made training and capacity building an essential component of its South-South cooperation programs with LDCs, Abbou added.

He also said that the Kingdom, which attaches great importance to promoting trade with its African partners, has set up a legal framework adapted to the level required by Morocco-Africa partnership, by concluding more than 500 agreements with over 40 countries of the continent to encourage the private sector to strengthen trade and increase investment flows to those countries.

He highlighted the decision of King Mohammed VI to cancel the debt of African LDCs and provide duty and quota free access for most of their export products.

This initiative contributed to strengthening trade and investment relations between Morocco and African LDCs, resulting in a significant increase in exports to Morocco, he said, adding that trade between Morocco and sub-Saharan Africa jumped by 300 per cent between 2000 and 2010.

Abbou also recalled that Morocco is the second African country investing in the continent and the first in West Africa.