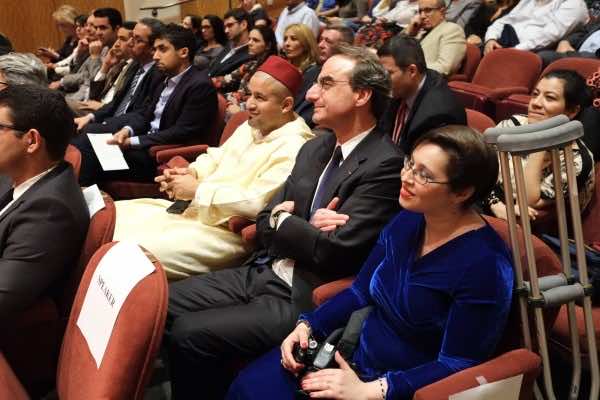 This night celebrated the strengthening of the relationship between the two communities in New York, and launched a new partnership with the Consulate General of the Kingdom of Morocco in New York. With the support of the Mimouna Association, the Consulate, Tourism Office, and a Moroccan Jewish distillery Nahmias et Fils, Americans and Moroccans marked this momentous occasion after having coordinated a series of smaller dinner gatherings over the past several months.

Following a VIP cocktail hour with some of the AJC young professionals, as well as diplomats from the Consulate and Morocco’s Permanent Mission to the UN, the audience gathered in the auditorium of the Center for Jewish History for the start of the formal program.

Despite delays caused by a massive train fire that disrupted thousands of New York commuters, several hundred people were in the audience.

A special guest speaker from Morocco – the Parliament’s Chairman of the Foreign Affairs and Defense Committee, Mehdi Bensaid – had missed two flights, but was still able to make it to the event in time to speak at the panel, fresh off the airplane.

The event opened with welcoming remarks from Consul General Mohammed Benabdeljalil, which underscored the Consulate’s interest in the continuation of its joint programming with the AJC and the ASF. He recalled his own memories of celebrating Mimouna, a traditional Moroccan Jewish holiday marking the end of Passover, where Muslim neighbors would join their Jewish friends in cooking delicious food, singing, and dancing. Now, Mimouna is being revived in Morocco thanks to the efforts of the Mimouna Association and its college-age partners, some of whom were present in the audience.

Benabdeljalil’s opening was followed by a beautiful travel video of Morocco’s best tourist destinations: from the fantastic beaches and delicious cuisine to the the magical dunes of the Sahara. As was mentioned, Morocco is unique in that much of the tourism industry is aimed at locals, not just travelers from abroad. Moroccans invest in their own country—the souvenirs tourists buy are also found in Moroccan homes.

Next, Dr. John Entelis, a professor at Fordham University and expert on North Africa, gave an enlightening talk about Morocco’s geopolitical role. He explained how and why Morocco stands out among its neighbors as a model of stability, and more importantly, growth, innovation, and improvements in education.

Entelis emphasized that unlike many of its neighbors, Morocco cannot rely on natural resources to be prosperous, and instead, focuses on making the best of its human resources. Although the country is poor due to its geographical limitations and lack of education, it admirably moves forward towards addressing these issues. Unlike nearby Algeria, Morocco had a short and less traumatic French occupation by France.

Likewise, the Spanish occupation did not cause an alarming level of national upheaval. During the Cold War, Algeria turned to the Soviet Union, but Morocco remained West-oriented and the King was able to unify the country by reaching Moroccans of all backgrounds. The balance of power between the monarch and the parliament creates a stable system that gives significant representation to a variety of different viewpoints. Even Islamists have their say, but within the context of checks and balances, and with no possibility of being regarded as symbols of martyrdom.

Entelis ended on an optimistic note about Morocco’s determination and thoughtful course of action that is placing it ahead of its neighbors.  The country strives not for dominance, but rather to be a model of stability and potential leader in entrepreneurship and innovation.

Jason Guberman, the Executive Director of the American Sephardi Federation, added depth to the understanding of Morocco’s unique position with respect to its Jewish citizenship by demonstration some of its accomplishments through the Diarna project. The Diarna project is a geomuseum that has preserved digital panoramas, as well as photographs and videos of Jewish historical sites and oral testimonies across the Middle East and North Africa. He showed the audience pictures of a beautiful synagogue, one of many preserved carefully in Morocco, where many Muslims care for sites in communities where Jews—many of whom have immigrated to other countries—are no longer present.

Additionally, Guberman showed pictures of a cemetery, just one of over 150 cemeteries designated by the King for protection and preservation. Morocco has uniquely proscribed the preservation of its Jewish heritage in its new Constitution, and has clearly been observing the spirit, as well as the letter, of that document. Other videos shown by Guberman included that of a Moroccan Jew speaking in his native Judeo-Moroccan Arabic dialect, as well as a Muslim man happily recalling Jewish prayers he had the occasion to observe.

The final portion of the program concluded with a panel moderated by Jason Isaacson, AJC’s Director of International Affairs, a political expert, and decorated by the King of Morocco. Isaacson engaged in conversation with the Mission’s Deputy Ambassador Abederrazzak Laazzel, as well as Mehdi Bensaid, who offered a great deal of additional insight from his perspective. Isaacson engaged both officials in the discussion of Ban Ki Moon’s “slippage” about the “occupation” of Western Sahara. Isaacson clarified for the audience what the UN Secretary General’s remarks actually were – an insult to Morocco and its role in countering terrorism and religious extremism, as well as its role in creating the Marrakech Declaration.

Upon the conclusion of the formal program, the audience joined AJC and ASF staffers outside in the Great Hall for a taste of fun and celebration that can be expected from the partnership in the future – Moroccan style. A Moroccan band, led by the renowned singer Jawad, played music that got the audience on their feet and dancing. When people were not dancing, they were eating delicious traditional Moroccan fare, catered by kosher restaurant “Eighteen.” Even a talented henna artist contributed to the party by giving guests beautiful henna tattoos on their hands.

The celebration went well into the night and was a tremendous success, but this is just the beginning of an important partnership. 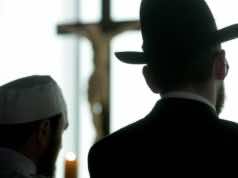