Rabat - The Mohammed V University of Rabat awarded, on Wednesday, the "Doctorate Honoris Causa" to Indian vice-president Mohammad Hamid Ansari who is on an official visit to Morocco. 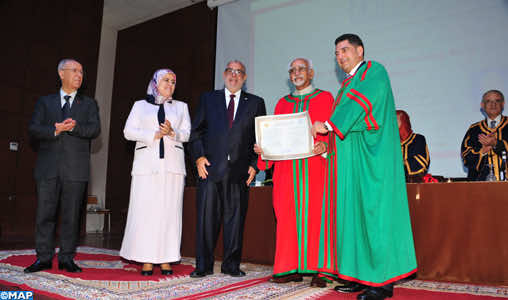 Rabat – The Mohammed V University of Rabat awarded, on Wednesday, the “Doctorate Honoris Causa” to Indian vice-president Mohammad Hamid Ansari who is on an official visit to Morocco.

During his mission as a diplomate in the Middle East and Western Asia, this staunch activist stood out for handling political issues of the region’s countries by writing several books, notably on the Palestinian issue, he said.

On this occasion, Ansari gave a conference on “Accommodating Diversity in a Globalizing World”, in which he underlined the need to accept and adopt diversity as a civic act.

“Indian Muslims have lived in India’s religiously plural society for over a thousand years, at times as rulers, at others as subjects and now as citizens. They are not homogeneous in racial or linguistic terms and bear the impact of local cultural surroundings, in manners and customs, in varying degrees,” Ansari underlined. The ceremony was attended mainly by the head of government, the minister of endowments and Islamic affairs and the communication minister, government spokesperson.