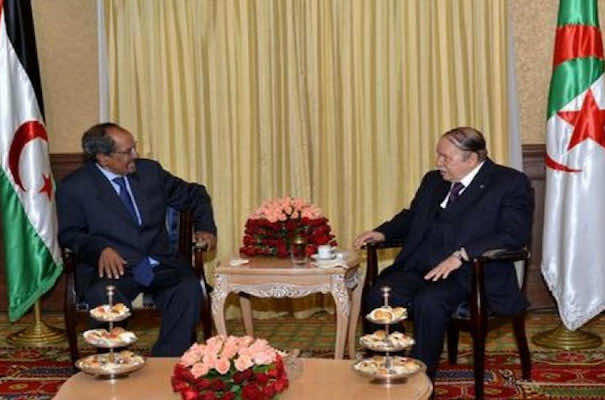 San Francisco – Polisario Leader Mohammed Abdelaziz’s life ended on Tuesday after a lifetime lived as a puppet for the Algerian regime. Did it never occur to him that the lives of the thousands of Sahraouis that he pretended to defend, are simply hostages subjected to hellish living conditions, locked inside the gates of Tindouf in the Algerian territory.

The Algerian official news agency APS announced the death of the leader before any other news media, to this author a sign that the Algerian regime is the one making decisions for the Sahraouis, including the announcement of the death of their supposed protector.

Under normal circumstances, one typically feels sorrow for those who die, but not for this puppet, who was responsible for the imprisonment of Moroccan prisoners of war (POWs) for decades upon Algeria’s orders. Moroccan POWs were the longest ever held POWS in the world.  Yet, he never had to face any consequences for his

actions. Instead, he died riddled with lung cancer, and even while dying, he had no choice but to meet the UN secretary general when he visited the camps.  Perhaps it never occurred to him that he could have saved the entire Tindouf population by simply giving up his false dream that

one day Morocco would relinquish an inch of the Sahara.  Although he received many offers to mend fences with Morocco, he refused, choosing instead to please Morocco’s enemies in the El Moradia palace in Algiers and perpetuatethe miserable lives of innocent men, women, and children in the harsh living conditions in Algeria.

As of the writing of the article, Moroccan officials have not commented on his death, nor have they sent any condolences. They are well aware that the death of the puppet will not end the conflict.

His replacement has already been carefully selected by Bouteflika’s clan. How odd that Bouteflika himself is suffering from exactly the same malady, but that apparently it has not crossed his mind that it is time for a united Maghreb, and to perhaps extend an olive branch to Morocco, as did Morocco’s King on several occasions.

One thing is sure, the death of a man whom many regard as a traitor will not change anything. Quite the contrary, it is good news for the Algerian regime. It will allow it to select someone who is in good health as the new Polisario leader and who will allow it to maintain its rule over the Sahraouis. Morocco, unfortunately will have no choice but to continue tofiercely defend itself against its many enemies.

The people of Morocco will simply have to come to terms with that for as long as Algeria is its neighbor. Nothing will change even after Bouteflika and his clan are no longer at the helm.