Rabat - A Spanish surgeon has helped a Moroccan woman recover her face, according to El Pais 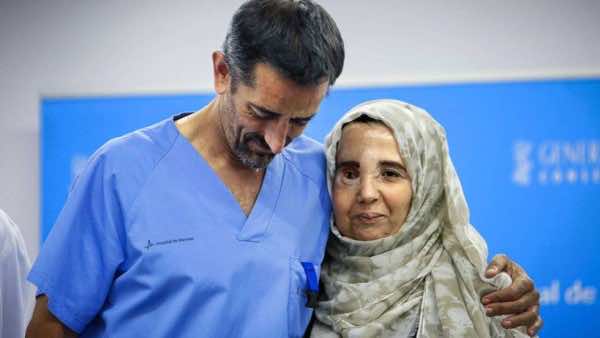 Rabat – A Spanish surgeon has helped a Moroccan woman recover her face, according to El Pais

Samira Benhar was recently rescued in Spain from neurofibromatosis type I, gave a press conference this Thursday, June 1 in Valencia hospital.

She was accompanied by her Spanish surgeon, Pedro Cavadas. Within a year, the 39-year-old had three operations in order to extract a tumor that was disfiguring her face and caused her to be unable to see from one eye.

Because the physical symptoms caused by this illness, Samira suffered from a “social rejection” as she explained, in addition to harassment that her children were subjected to: “A new life was given to me, because the present situation was unbearable.”

Samira’s journey to recovery began with a meeting with a pharmacist in Casablanca. She took a picture of Samira and said to her, “I don’t promise you anything, but I will try to help you.” The pharmacist’s family, who lives in Spain, welcomed Samira into their family. The Islamic center of Valencia offered her interpretation and assistance during her visit.

Dr. Cavadas explained to journalists that he helped Samira because her file “presented possibilities for surgical improvements.”He thanked the people who introduced the young woman to him. “Those are engaged people that are willing to help, in contradiction to those that sometimes want to leave the problems without cooperating. “

The Valencia hospital paid for the entire cost of the surgery. Pedro Cavadas is one of the most well known surgeons in the world. In 2008, he performed the first double hand transplant in Spain, In 2009 he performed the first face transplant in Spain. In two or three weeks, Samira will be able to return to Morocco. Rejected by her husband, the association Adra is prepared to give her financial support in order to allow her to “live in dignity” with her two sons.