El Jadida - Maraboutism is derived from the French word "marabout" which is in turn derived from the Arabic word ‘murabit’: a religious disciple or volunteer in a holy military camp. Today a marabout is a tomb of a saint very often with the particular name of the saint given to a specific site. Whole regions and cities in Morocco are named after local marabouts. 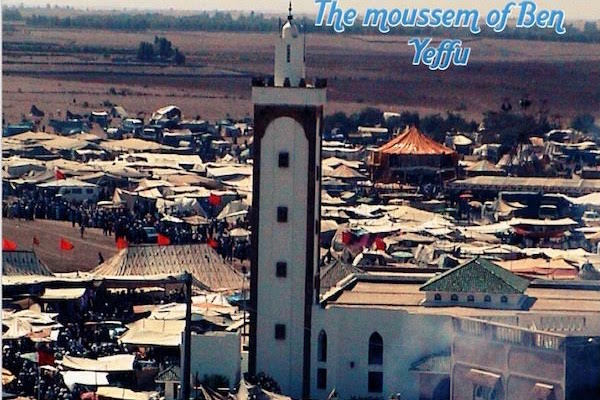 El Jadida – Maraboutism is derived from the French word “marabout” which is in turn derived from the Arabic word ‘murabit’: a religious disciple or volunteer in a holy military camp. Today a marabout is a tomb of a saint very often with the particular name of the saint given to a specific site. Whole regions and cities in Morocco are named after local marabouts.

The predominant belief is that the sites enjoy the saints’ protection/sanctuary (hurum). Hence the popular name of saints: “Men of the Land / patron-saints” (rijal l-blad)—the slogan that goes “Morocco is the land of one hundred thousand saints” would not be an overstatement. In the past descendents of saints were known as marabouts and were seen to be endowed with the baraka (blessing) of God. Like shurfa (holy descendents of the Prophet), they enjoyed considerable privilege and symbolic capital almost as a separate social group.

Bel, Geertz and Eickelman argue that the fever of sharifism in the fifteenth century incited a lot of saints or their descendents to root their legitimacy in declaring themselves as shurfa. Hammoudi maintains that the social class of marabouts was complex; in practice its members could be classified either on top of the ladder, right below the shurfa, or lower than the masses of ordinary men and women, depending on the authority of the charisma they inherited. This means that unlike the category of shurfa depending on their predetermined social origin, the social category of marabouts was open to new members’ admission depending on their acquired religious / magical skills and people’s will, which may either elect pious people to the status of sainthood or may treat them as worthless misfits.

Historically, the maraboutic institution catered for the needs of the commoners, who unable to have some measure of control over their lives and convinced of weakness, looked for saviors with charismatic powers to protect them. Possibly projecting their unfulfilled desires, they imagined saints wielding all powers that they so conspicuously lacked themselves.

According to Hijazi, the dominated under magical influence saw saints as possessing miraculous powers including: resurrecting the dead; talking to them; walking on sea water; talking to animals and inanimate things; traveling outside time; foreseeing the future; abstaining from food and drink; knowing where treasures were buried; and being immune to poisoning. Saints have been considered legendary rescuers of the masses from situations of misfortune and disaster.

Historiographers such al-Bazzaz, a-Ttadili, and Boulqtib state that some have used their riches to house the poor and help the needy; some have helped in digging out wells and springs to water the land, and some have used their charisma to form alliances of murabits to fight invaders and despotic regimes. In times of famine, saints opened their lodges to accommodate the poor and the homeless. They distributed grain in miserable regions to alleviate the hunger of the poor.

In Fez, for instance, Ibn ‘AJuz reserved an acre of cultivated land for the poor. Abu Zakariya Yahya Ibn ‘Abd Rahman a-Ttadili offered in charity about two rooms of corn to the needy in Fez during the famine of 571H/ 1175 to the extent that he did not leave enough provisions for his blind son. The examples of saints’ generosity towards the wretched population abounded during medieval famines and droughts. In fact, the saints’ local help, as Boulqtib argues, was much more effective than that of the Almohad regime that was poorly dispersed throughout the country.

In those times of stress, the wretched population conjured up metaphor-saints responding to their own needs. They endowed them with all the powers they could not afford in their hostile environment. Saints were imagined as capable of invoking food from nowhere during times of famine, of bursting forth water-courses during times of drought, of healing illnesses during times of epidemics, and of releasing people from the yoke of oppression during times of tyranny. All those charismatic powers were recognized as the baraka of saints.

Saints’ movement would expand to a degree that each region owned its protective patron saints to spiritually uphold it during times of stress. Mulay Taybi Al-Wazzani was a good case in point. Once, the folk of Wazzan requested him to lead their rain prayers (salat l-istisqa’) during periods of dryness; when he did so, it was said that God sent his rain that fertilized the whole Country. Another example was what Mohammed Ben Ja‘far l-Kattani narrated about one of the saints in Fez.

When the rain became scanty and the Moslems were worried about their harvest, they would gather and head for the shaykh Sidi Mohammed. They would ask him to come out with them for rain prayers. He would lead them to the shrine of Sidi l-Haj Budarham, his own master. Then, he would tell them: “give me some water!” when they gave him water; he would fill his mouth and blew water into the air [thus performing a ritual of sympathetic magic to influence the rain; the shaykh’s mouth imbuing water with baraka]. Then the crowd of supplicators would return home. During the night, the rain would fall heavily.

The theoretical assumption here is that in ‘less protected communities’ [where] there is no adequate scientific understanding of [the] … distressing and socially disruptive events…culture prescribes definite institutionalized ways of dealing with … them,” as Beattie maintains. In other words, in social contexts where scientific knowledge that may provide an empirical alternative is lacking, illness, death from disease, starvation and oppression may be dealt with in symbolic and expressive terms. This does not mean that ‘advanced societies’ operate only by scientific empirical beliefs. They may also have at least some magical beliefs embodied in their religious or political rituals. But in less protected communities magical activity may have a more important function. Misfortune may be averted or alleviated by recourse to magico-religious beliefs and rituals.

Correspondingly, Moroccans, in the face of disaster and oppression, have delved in magical activities and sought the protection of saints; they have used their own popular culture to find solutions to their problems facing the effects of the harshness of nature (droughts, famines, epidemics, etc.), the exploitation of the Makhzen, and the repression of colons.

Legends surviving to the present represent saints as sultans at a small scale in their own regions. A number of saints, as the mythic tradition states, rose against the Black Sultan (seltan l-khal) and defeated him. The Black Sultan was a symbol of terror and oppression in the popular mind –take the example of the Pasha al-Glawi whom the collective memory designated as the Black Sultan of the Haouz (Pascon, 1983). The expression seltan l-Khal was used by the commoners to refer either to the Marinid Sultan Abu al-Hasan al-Marini (El Ouaret, 2001; Hajji, 1988), or as my respondents in previous field research claim to the Alawite Sultan Moulay Ismail due perhaps to their black color or dark powers. There are ruins of a palace of the seltan l-Khal in Ras al-Hmar on the boundaries between Rhamana and Doukkala.

Up to now, the binary opposition—saints vs. Black Sultan—structures the worldview of the maraboutic society. Its legends convey the war between the Black sultan and saints. Sidi Mas‘ud Ben Hsin in the region of Doukkala, for instance, is said to have aborted the seltan l-khal’s attack by sending bees and gadflies (nna‘ra) to chase him away. Ben Yeffu vanquished him by the magical aid of a black jinni with seven heads or by the divine Secret when he gave his orders to the invisible powers to rent the sultan off his horse and lift him to the skies.

The Black Sultan seems to be a mythic symbol of any Sultan whose rule has been oppressive in the history of Morocco. That saints can triumph over the Black Sultan expresses the symbolic protection they can offer to the subalterns, which elects saints to a higher social leading rank held in awe and veneration in their own regions; a political expression of sainthood whose historical roots we can still trace in Moroccan saints’ legends and maraboutic practices.

If one visits a saint’s tomb, like Ben Yeffu for instance, one may have the impression that one is in the presence of a real Sultan. Ben Yeffu, the Sultan of Jinn or the Green Sultan as he is locally named, has bequeathed to his children and ardent devotees sacred places metonymically associated with his baraka. There you discover a dome, the ruins of a palace, a cairn (kerkour), and a horse’s hoof print all endowed with mythic attributes. The ceremonial rituals performed by saint-goers at these sites mainly follow a schema of submission to the Sultan-saint. A variety of symbols, rituals and myths combine with each other to shape a mythic edifice of a sultanic institution.